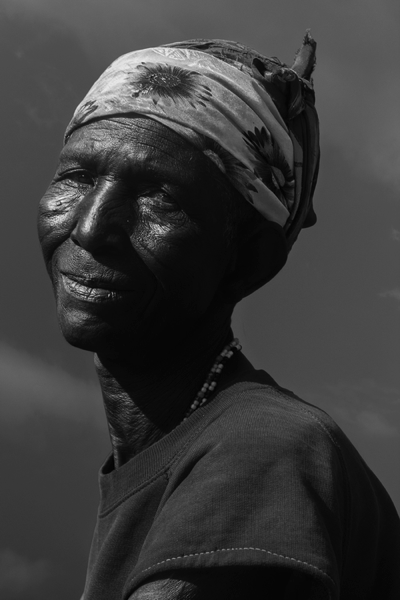 This series is is truly something to behold. We love how Eric Gyamfi’s choices in this series, the usage of black and white combined with fairly tight shots and similar body positioning, work together to create a cohesive whole while allowing each woman to shine as an individual. Here’s a little history from Eric Gyamfi:

This camp was established about 200 years ago. Currently has a population of 130 women “(witches)”.

The youngest woman is 17 and the eldest is a 90 plus year old woman.

When one is accused of witchcraft wherever they find themselves(particularly in the northern part of Ghana, they seek to come to the chief in charge of the camp, who then proceeds to perform a ritual to ascertain as to whether the accused is guilty or innocent of the charges being brought against her. It is quite interesting to note that there are no male witches/wizards at the camp. Popular explainations ranging from “men use witchcraft for good”, “male wizards do not eat babies”, “men use witchcraft for the art of war/fight”, etc

Eric Gyamfi on the series:

One major decision I took upon speaking to the women, was the fact that I was not going to paint their devastation back to them. These women, broken as they were from their individual traumatic experiences pressed on daily with such resilience and beauty, in the face of all the devastation that engulfed them inside out. It was this beauty and strength I wanted to paint back to them. That they will pick up these images of themselves, and would not be reminded of their unfair condemnation, rather, they’d see a part of themselves that would will them on, to fight. That strong beautiful part of being a woman!

Read more, take a look at the full gallery, and check out this interview from feature shoot