The Wall Street Journal asks “Is the Jetpack Movement Finally Taking Off?” #WearableWednesday 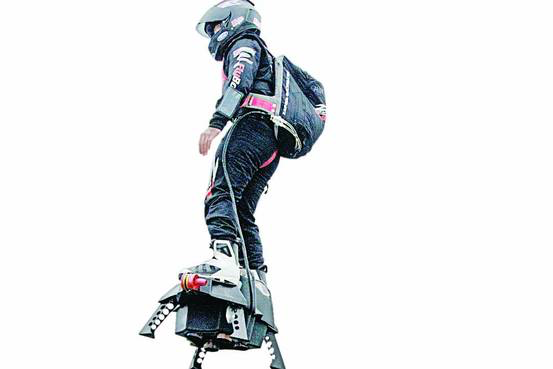 The Wall Street Journal has an article outlining the history of jetpacks and where they are at now.

DAVID MAYMAN’S RIGHT THIGH is covered by a skin graft, the aftermath of a jetpack crash. In 2010, a “rocket belt” he bought in Mexico shot 1,300-degree steam down Mayman’s leg after he missed a landing in Australia, leaving him with third-degree burns. Today, in an avocado orchard north of Los Angeles, the clean-cut, 53-year-old Australian millionaire wears a thick, black flame-retardant jet suit. He asks the small crowd to don protective eyewear. Fire extinguishers are on hand.

Mayman flips a switch and the two jet engines strapped to his back roar to life. Heat waves and jet fumes radiate from the twin turbines as the engines rev up. And then, without warning, Mayman’s feet leave the ground. His upward progress is slow and stable; 10 seconds after liftoff, he’s eye-level with a drone hovering at 20 feet. Mayman gives a thumbs-up for the camera and then floats back and forth over the field. It’s thrilling to see and overwhelming to hear; this long-promised vision of the future comes with a 120-decibel soundtrack—louder than a chainsaw.

An entrepreneur and aviation buff from Sydney, Mayman retired early to dedicate himself to flying with nothing but the pack on his back. His company, JetPack Aviation Corp., has spent about 10 years and $10 million on this latest version: an 85-pound aluminum and carbon-fiber contraption that burns 11 gallons of jet fuel for a 10-minute flight. The nine-person firm is now seeking $2 million to $5 million to add rocket-propelled parachutes—in case of unscheduled landings—and bring its jetpack to market for about $250,000 a pop.

“There’s so much further we can take this,” Mayman says. “We want to raise that money to fund the R&D. Because somebody’s going to do it if we don’t.”

Comments Off on The Wall Street Journal asks “Is the Jetpack Movement Finally Taking Off?” #WearableWednesday