Champions of Change @ The White House. Thank you Adafruit team members, friends, community and makers out there!

WASHINGTON, D.C. – On Friday, June 17, the White House will recognize ten individuals from across the country as “White House Champions of Change for Making.”

These individuals were selected by the White House for their personal passion and tireless efforts to make advances in technology and platforms, educational opportunities, or spaces that empower even more Americans to become tinkerers, inventors, and entrepreneurs.

This celebration comes on the anniversary of the first-ever White House Maker Faire in June 2014 where President Obama launched the Nation of Makers initiative, an all-hands-on-deck call to make sure more students, entrepreneurs, and Americans of all backgrounds have access to a new class of technologies—such as 3D printers, laser cutters, and desktop machine tools—that are enabling more Americans to design, build, and manufacture just about anything. Last year, the President expanded the work and asked “all Americans to help unlock the potential of our Nation and ensure these opportunities reach all our young people, regardless of who they are or where they come from.”

The Champions of Change program was created as an opportunity for the White House to feature individuals doing extraordinary things to empower and inspire members of their communities. The event will feature remarks by U.S. Chief Technology Officer Megan Smith and Thomas Kalil, Deputy Director of the White House Office of Science and Technology Policy.

It will be live streamed on the White House website at www.whitehouse.gov/live/ on Friday, June 17, at 1:00 PM ET. Follow the conversation at #WHChamps and #NationOfMakers.

Gregg Behr – Pittsburgh, Pennsylvania
In his ten years as executive director of the Grable Foundation, Gregg Behr has not only led the Grable Foundation’s portfolio of community investments but has also worked tirelessly to build a collaborative funding environment called the Remake Learning Council. This network has grown from the original conversation over a pancake breakfast to now include more than 250 schools, museums, libraries, and others organizations working cooperatively to re-imagining early childhood education, teaching and learning in public schools, and out-of-school time supports. In 2016, Gregg was instrumental in organizing a regional effort called Remake Learning Days to collected more than 150 commitments that will help accelerate hands-on, personalized learning and which included $25 million+ in investments from philanthropies, businesses, and governments to support 21st century learning across southwest Pennsylvania and West Virginia. Gregg has been recognized across the country for his work to support the maker movement, including receiving the Tribeca Disruptive Innovation Award behalf of Pittsburgh’s Remake Learning Network and the being named America’s Top 30 Technologists, Transformers, and Trailblazers by the Center for Digital Education in 2015.

Umberto Crenca – Providence, Rhode Island
At the heart of the nationally-known makerspace AS220 is co-founder and artistic director Umberto Crenca. In the 31 years since Umberto set out to co-create an incubator of maker culture and a lab for integrating STEM and the arts, AS220 has grown from a single rented room above the Providence Performing Arts Center to now include three buildings totaling 95,000 square feet. Umberto has focused his work on building a collaborative community committed to supporting exchange of knowledge between innovative makers and creative thinkers. He was recently awarded honorary doctorate degrees from Brown University and Roger Williams University for his commitment to community development, his work to help revitalize downtown Providence, and his success at creating opportunity for artists and makers.

Dara Dotz – San Francisco, California
Motivated by her first-hand experience responding to large scale disasters, Dara Dotz is a pioneer in exploring how making can solve global problems in austere environments. She is the co-founder of Field Ready, which brings hyper-local digital manufacturing to people in disaster areas, allowing survivors to make humanitarian supplies on-demand. Dara’s innovations have been deployed around the world including in the aftermath of the Haiti earthquake, where survivors were trained to make essential medical supplies and replacement parts for rural clinics using 3D printers she brought to Haiti. She holds a BS in Industrial Design and minor in International Business from Metropolitan State University of Denver. In addition to her work, she is a guest lecturer and educator who is inspires children to solve for the complex natural, economic, and humanitarian needs though making.

Limor Fried – New York, New York
While studying engineering at the Massachusetts Institute of Technology, Limor “Ladyada” Fried decided to create a company focused on supporting learning electronics for makers of all ages and skill levels. In 2005 she founded Adafruit which has grown to now employ more than 100 individuals in their 50,000 sq ft. NYC factory. Limor is committed to building both innovation and community and is known for creating resources for learning. She was the first female engineer on the cover of WIRED magazine and was awarded Entrepreneur magazine’s Entrepreneur of the Year in 2012 and was also on the NYC Industrial Business Advisory Council. Adafruit is a 100% woman-owned company.

John Niebergall – Sherwood, Oregon
For more than 32 years John Niebergall has dedicated himself to training the next generation as an educator in the Sherwood School District in Sherwood, Oregon. He has worked tirelessly to provide his students with hands-on, contextualized learning experiences and has directly raised more than $825,000 through grants and in-kind contributions to establish a classroom and mobile Fab Lab. As a result of access to both top-level instruction and industry-standard software with state-of-the-art prototyping equipment, numerous students in Mr. Niebergall’s class have launched student-run, school-based enterprises. Of particular note is his successful efforts to create a culture of inclusion in his classroom with a notably high participation of female students. His instructional approach allows students direct experiences with the real-world challenges of designing, developing, manufacturing, and marketing. John has mentored other career and technical education (CTE) programs and educators.

Sonya Pryor-Jones – Boston, Massachusetts
Committed to ensuring more communities have access to the tools of tomorrow, Sonya Pryor-Jones serves as Chief Implementation Officer for the Fab Foundation out of Boston. A non-profit spin off of the Center for Bits and Atoms at the Massachusetts Institute of Technology, the Fab Foundation supports communities spaces that provide access to tools to educate, innovate, and invent using technology and digital fabrication, and to allow anyone to make (almost) anything, creating opportunities to improve lives and livelihoods around the world. Sonya is personally driven to create more equitable access for more diverse communities and has spent her career in the service of this mission. Prior to her current role at the Fab Foundation she served as the founding Director for the Promise Neighborhood initiative at the Sisters of Charity Foundation, and the Executive Director for Northeast Ohio’s STEM Initiative at Case Western Reserve University.

Felton Thomas, Jr. – Cleveland, Ohio
Since his own experience as a young boy growing up in a tough Las Vegas community and finding his way through the support of his local library, Felton Thomas, Jr. has been an advocate for formally supporting informal learning and community. From his first job in a library as a teen to his current position as director of the Cleveland Public Library (CPL) and President-Elect for the Public Library Association (PLA), he has seen tremendous transformation of the technology landscape and opportunities for creative use of library space. Under Felton’s leadership, CPL has created a dedicated makerspace called TechCentral to provide open access for patrons to laser engraving, 3d printing, audio, video, photo production tools and more. He has further expanded this work to now include MakerLab programs at 27 CPL branches featuring high and low-tech versions of photography, 3D printing, font creation, computer programming, art and design, laser engraving and cutting, and more. Felton has received numerous recognitions for his leadership role including being appointed to the Aspen Institute’s Task Force on Learning and the Internet, being named a “Mover and Shaker” by Library Journal, and serving as a fellow and Sponsor in the Urban Library Council’s Executive Leadership Institute.

Bahiy Watson – New Orleans, Louisiana
After the devastation of Hurricane Katrina in 2005, Bahiy Watson committed himself to creating opportunities for his community from the ruins and began rallying others to help save a local youth center. After increasing volunteering and advocacy work for a number of years, Bahiy’s commitment led him to create the 1881 Institute of Technology, which draws inspiration from the work of Booker T. Washington to found Tuskegee Institute in 1881. Building off of his 17 years of direct experience as a mechanical engineer in the aerospace industry, Bahiy is working to create pathways for underrepresented populations to enter STEM careers by creating hands-on projects directly impacting the surrounding community. In addition to developing alternative school models for high school students interested in STEM careers but who struggle in traditional classroom settings, 1881 is partnering with the New Orleans Recreation & Development Commission to offer summer camps and after school programs for African-American children and for students with special needs.

Lisa Marie Wiley – San Antonio, Texas
Retired Army Sergeant Lisa Marie Wiley is part of the growing group of women who have served their country in combat zones. In November 2011, Lisa stepped on an IED during deployment in Afghanistan, resulting in a left below the knee amputation. Passionate about living an active lifestyle, Lisa committed to finding a better solution which could enable her and amputees in similar situations and worked with the VA to design a challenge aimed at developing a coupler device that would make it easier and faster to switch between prosthetics. This work has since become part of a larger initiative called the VA Innovation Creation Series aimed at crowdsourcing innovative low-cost prosthetics and assistive technologies from the Maker community. Lisa is showing how the Maker Movement and the democratization of low-cost tools and technologies for design and fabrication to develop solutions that will result in more precise and personalized care for not only females or veterans, but anyone who can access a computer and a 3D printer. Lisa is currently earning an additional bachelor’s degree in biology at the University of Texas San Antonio. 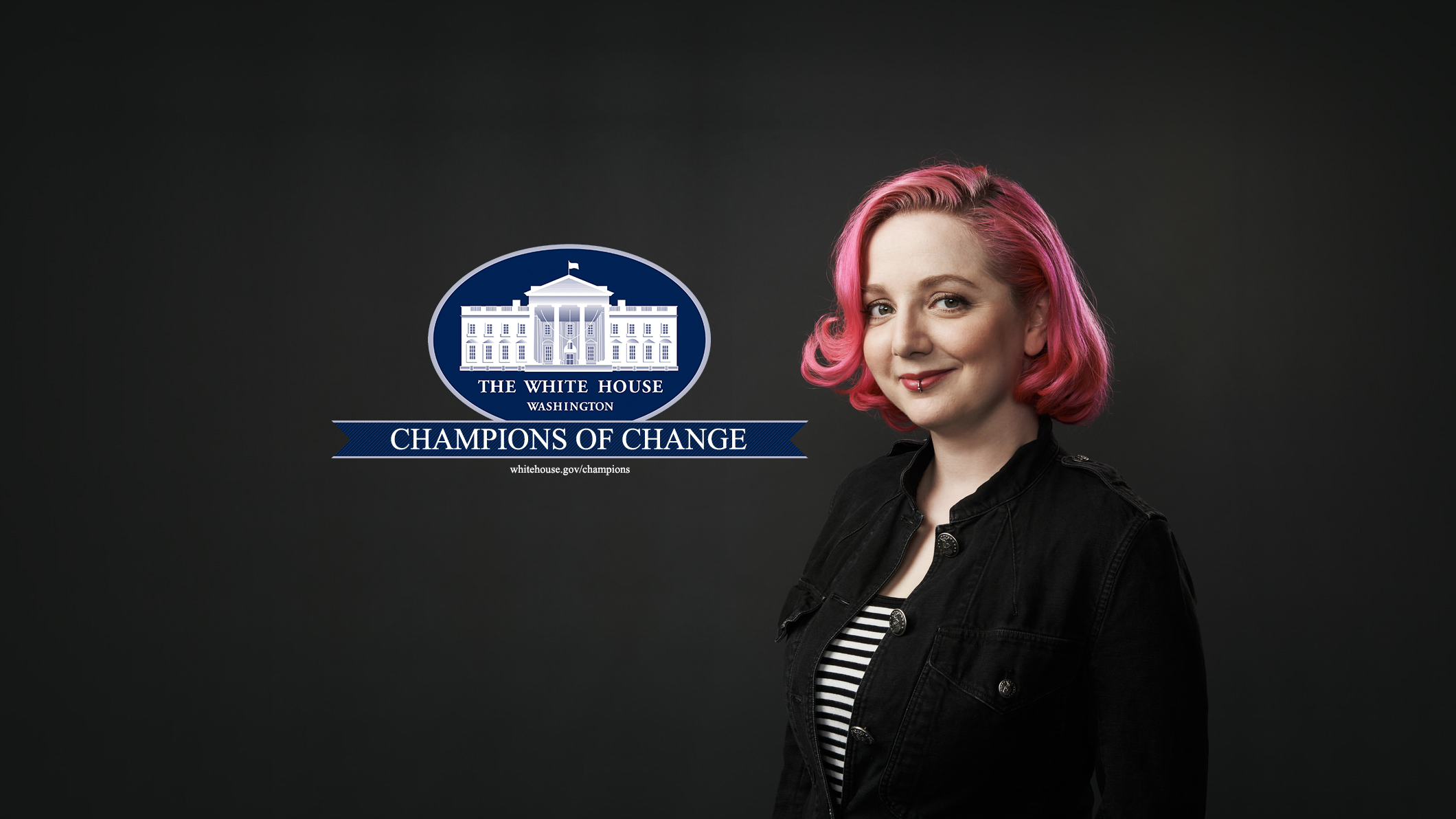 We’ll posting photos, videos and more from the visit & events!