Having already dabbled in the artforms of tattooing, Etch A Sketching, and mind control, Russian gadgeteer ::vtol:: has delved into a more traditional medium for his latest project: conducting. It woudn’t be a ::vtol:: project if it didn’t push some boundaries, though, so Nayral-Ro turned out to be a fully robotic orchestra that blasts discordant whistles and hums in reaction to physical gestures.

12 robotic arms holding speakers stand mounted on podiums in the Nayral-Ro orchestra pit, routed to a Magic Leap Motion Controller mounted on the conductor’s stand. The device turns hand gestures into commands in a way similar to how theremins turn proximity into sound, making ::vtol::’s machine symphony like a theremin plus: as the human conductor wildly waves his or her arms over the podium, each speaker bends and rotates, the algorithm generating compositional changes. Listeners are treated to the chaotic soundscape of 12 different sounds coming from 12 ever-changing directions, which would be abrasive if it didn’t look so cool. Coming from a guy who has even made music from dangerous radiation, practicality is beside the point.

Nayral-Ro was commissioned by the Garage Museum of Contemporary Art and the Geek Picnic Festival, so thank them either for your profound realization about the nature of sound and machine-generated art, your ringing ears, or both. 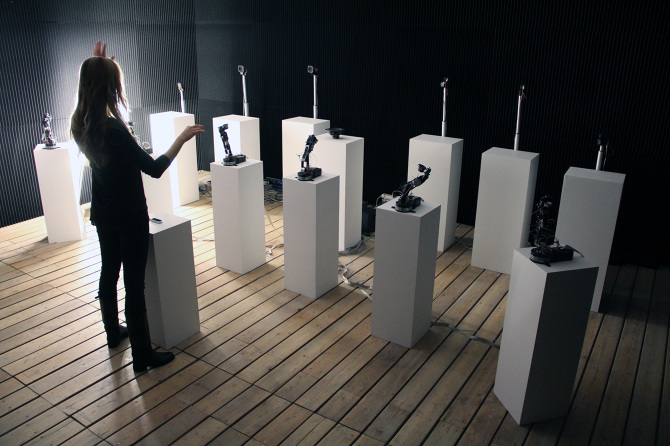