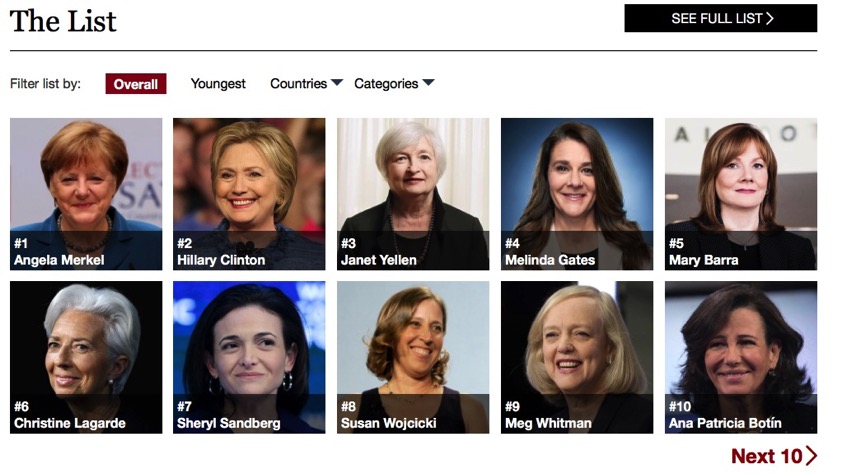 The Forbes World’s 100 Most Powerful Women is always a fun and inspiring read. Check it out here.

Who are the world’s most powerful women this year? They are the smartest and toughest female business leaders, entrepreneurs, investors, scientists, philanthropists and CEOs making their mark in the world today. They’re women who are building billion-dollar brands, calling the shots in the financial markets, and crisscrossing the globe to broker international agreements and provide aid.

Their accomplishments are formidable on their own, and even more so given how hard it can be to establish inroads into industries and job titles traditionally dominated by men. Statistics on women in positions of power remain bleak. According to the latest survey by Catalyst, a nonprofit that tracks gender parity in the workplace, women occupy a measly 4% of corner offices at S&P 500 companies. And they hold only 25% of executive or senior-level jobs in those same firms.

Amidst sobering numbers like these, one offers new promise. Since 2005, the number of women who are world leaders—presidents or heads of state—had more than doubled by last year, according to the Pew Research Center.

Evidence of this trend is visible. In the past year alone, Taiwan, Myanmar, Nepal, Croatia, Mauritius, and Lithuania have elected or reelected female leaders to office. And of course, there is U.S. presidential candidate Hillary Clinton, who as of press time continues to hold the lead in the primaries.

As with every year, four metrics were used: money (either net worth, company revenues, or GDP); media presence; spheres of influence; and impact, analyzed both within the context of each woman’s field (media, technology, business, philanthropy, politics, and finance) and outside of it.

With the advent of more women behind the presidential desk, we had to make some tough decisions—most notably, cutting the Celebrities category to make room. And so new leaders replace icons, with a spate of new countries joining the list.

Ameenah Gurib-Fakim, the first woman to become president in Mauritius, believes it’s the latter. “People say to have power, you hire and you fire,” she says. “I don’t subscribe to this notion. For me, power is the ability to influence. If you can influence in the long-term by leaving behind a legacy, to me, that’s real power.”

There is no doubt that the women on this year’s list are doing just that.