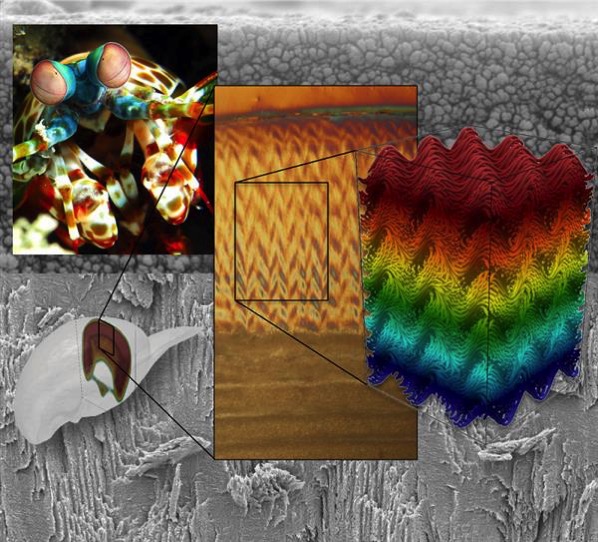 Researchers at the University of California, Riverside and Purdue University have used the mantis shrimp as inspiration for a new 3D printed material. The crustacean’s club-like appendage, used to beat prey, consists of an unusual herringbone pattern, which the researchers synthetically replicated.

When looking for ways to strengthen a material, nature often provides the best answers. Airbus recently found that they could copy cell and bone structures to make a 3D printed airplane cabin partition, while researchers at Purdue University last year had a “Eureka!” moment with honeycombs, whose patterns were mimicked to make a super-strong 3D printed material for football helmets.

Now, some of those same researchers from Purdue, in collaboration with others from UCR, have found inspiration in a small marine crustacean known as a stomapod, or mantis shrimp. No, the shrimp didn’t have any words of advice for David Kisailus, the Winston Chung Endowed Professor in Energy Innovation at UCR’s Bourns College of Engineering, but its unusual anatomy gave the professor an idea.

As it happens, there are two kinds of stomapod, “smashers” and “spearers”, with the “smasher” variety of the creature possessing a strange weapon in its arsenal called a “dactyl club”, a fist-like appendage used to beat prey to smithereens. While the “spearers” use a sharp spear-like appendage to stab prey, the “smashers” fling their dactyl club with an acceleration of 10,000g, inflicting huge damage on their unfortunate victims.

What makes the dactyl club so effective is not just the speed at which it is wielded, but the sheer strength of the organic weapon, which delivers so much force yet remains undamaged itself, even after repeated blows. The club consists of several different regions, each of which contribute to its overall strength in a different way. The interior “periodic” region, which consists an organic phase and calcium phosphate / calcium carbonate phase, absorbs energy and filters out shear waves.