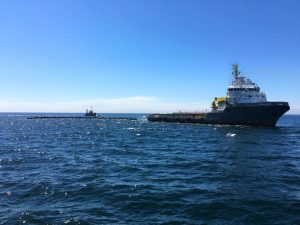 The Ocean Cleanup  has launched its first prototype in the North Sea.  While the ultimate challenge for the project may be tacking the Great Pacific Garbage Patch, the real test is to see if the prototype can withstand the turbulent conditions it is likely to meet at sea.

[Ocean Cleanup founder Boyan] Slat’s garbage-collecting barriers have been described as artificial coastlines. They are basically long floating arms that rely on the ocean’s natural currents to gather up plastic waste. Since he first introduced the concept, the Ocean Cleanup Project has raised US$2.1 million in crowdfunding and completed a feasibility study on its main target, the Great Pacific Garbage Patch, which some experts believe to be twice the size of Texas.

But before tackling this monumental vortex of ocean trash, the team needs to investigate how the barriers stand up under extreme conditions. Measuring 100 m (330 ft) long, the North Sea prototype is fitted with sensors that monitor its motion in the ocean, along with the physical loads that it is subjected to as waves rise and fall around it.

Comments Off on Ocean Cleanup Launches Prototype In North Sea