What’s next for Jupiter missions after Juno? #Space 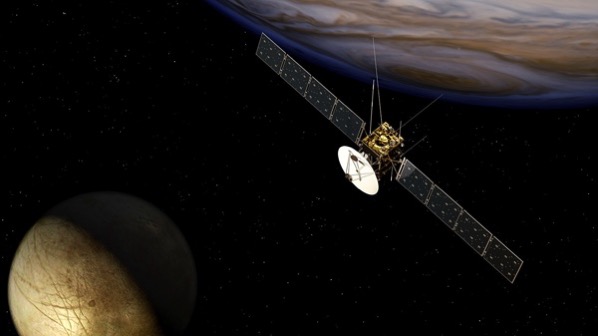 Now that Juno has fallen into orbit around Jupiter, what’s next? Via Astronomy

Juno (JUpiter Near-polar Orbiter) is the sixth spacecraft to study Jupiter (give or take a few gravity assists), but will be the second to fall into orbit around the gas giant following the Galileo probe in 1995. It is part of NASA’s New Frontiers space exploration program that specialize in researching the celestial bodies of the solar system. Juno was launched on August 5th, 2011 from Cape Canaveral Air Force Station in Florida with the intent to be placed in a polar orbit around Jupiter to study the planet’s composition, magnetic and gravity fields, and the polar magnetosphere. Even as Juno’s scientific mission only occurs for a year, many more spacecrafts are headed Jupiter’s way.

The next upcoming Jupiter mission following Juno is the European Space Agency’s (ESA) first large-class mission in its Cosmic Vision program, the JUICE (JUpiter ICy moon Explorer). It is planned for launch in 2022 at the Guiana Space Centre in French Guiana and will arrive at Jupiter in 2030. JUICE will then monitor Ganymede, Europa, and Callisto, three of the four Galilean moons, as well as Jupiter for three and a half years. As all three of these worlds are believed to possess significant bodies of water beneath their surfaces, the JUICE Mission will explore their habitability in depth.

On December 9th, 2015, ESA and Airbus Defence & Space signed a contract signifying that Airbus would be building the spacecraft at their base in Friedrichshafen, Germany. The scientific instruments on JUICE will be built by scientific and engineering teams from all over Europe, with some participation from the United States and Japan.

Comments Off on What’s next for Jupiter missions after Juno? #Space