‘Artificial Eye’ Sensor Can See in the Dark #Biomimicry 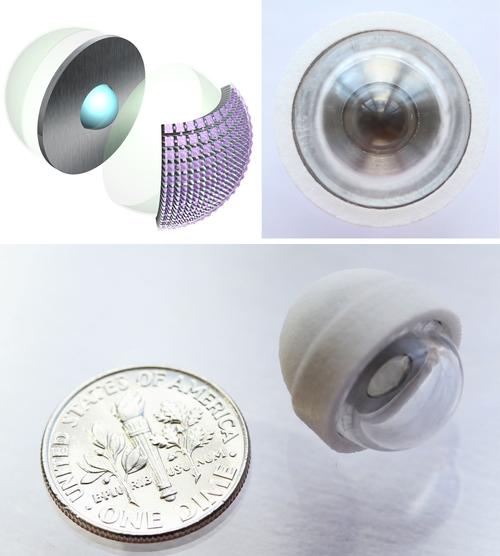 While digital imaging has become highly refined, there are still frontiers yet to be conquered, like seeing in the dark. Sure you can use lighting but it’s not always practical, plus it only works in close quarters. Infrared night vision is handy but it only responds to objects that are warm and doesn’t give a visually recognizable image.

Researchers at the University of Wisconsin in Madison (UW-Madison) have addressed this challenge with biomimicry and developed the bioinspired photosensitivity enhancer (BPE), an “artificial eye” inspired by creatures that live deep under the ocean, where light is scarce and the water is murky.

Most efforts to develop such a device have focused on improving the sensitivity of the image sensor. But Professor Hongrui Jiang of the UW-Madison Electrical and Computer Engineering Department and his team have instead concentrated their efforts on the optics that focus the incoming light. The team hopes their technology can someday be used robots, space exploration, and even medical applications like endoscopes and X-rays, where highly photosensitive sensors could be of great benefit. “Inspired by natural scotopic visual systems, we adopt an all-optical method to significantly improve the overall photosensitivity of imaging systems,” the researchers wrote in a paper published in Proceedings of the National Academy of Sciences (PNAS). “Such optical approach is independent of, and can effectively circumvent the physical and material limitations of, the electronics imagers used.”

The elephantnosed fish is found in the Niger River basin, where it prefers slow-moving muddy water. As the name suggests, it has long slender protrusion that looks like a nose, but is actually an extension of the mouth. It uses an electric field to help sense its surroundings. But the fish also has unusual eyes with a combination of photonic crystals, parabolic mirrors and a clustered arrangement of rods and cones that help it to see in the dark. This clustered arrangement on the retina is composed of thousands of tiny crystal cups rather than the smooth surfaces common to most animals.

Inspired by the fish, as well as the compound eyes of lobsters, which are known for their high light sensitivity, Jiang and his team built an array of tiny parabolic mirrors and placed them on the surface of a hemispherical dome. Based on the principle of superposition, the “cells” capture light coming in from a variety of angles and then concentrate them to a single point. The result was a fourfold increase in sensitivity. “That makes the difference between a totally dark image you can’t see and an actually meaningful image,” Jiang said in a news release. The lens can be used with any type of imaging system.
While superposition compound eyes are extremely sensitive, that sensitivity comes at the expense of sharpness. When light from several sources is combined at a single point, brightness improves but distinctions become blurred. To compensate for this effect, Jiang’s group used a super-resolution-processing algorithm to produce crisp, clear pictures.