Getting a grip on mussel adhesion #Biohacking

The Asian green mussel (Perna viridis) anchors itself underwater by timed secretion of adhesive proteins from threadlike foot extensions, a team of researchers in Singapore finds1.

Lab experiments and computer simulations reveal that an especially long sticky protein acts as a primer — first catching the surface and repelling water molecules to make way for two proteins that form the final adhesive pad.

The discovery could lead to new submersible glues or improved paints to prevent biofouling on ship hulls and drilling platforms.

“Water is not a friendly media for sticking stuff together, but many marine creatures are able to do it,” says Ali Miserez, who led the research at Nanyang Technological University, in collaboration with Chandra Verma at the A*STAR Bioinformatics Institute, with funding from the Maritime and Port Authority of Singapore and the Singapore Maritime Institute. “By getting a glimpse of what exists in nature, we can mimic and manipulate it toward something useful,” adds Verma.

Mussels, within seconds of feeling out a rock with their foot, begin to produce long, stiff and durable threads, called byssus — usually described as the mussel ‘beard’.

Miserez’s laboratory had previously identified the byssus proteins — Pvfp-3, -5 and -6 — but wanted to know if they released in sequence or all at once. His team took a series of samples in rapid succession from Asian green mussels induced to secrete byssus onto a glass plate.

Mass spectrometry revealed that one protein, Pvfp-5, always comes out first. Further analysis, using methods called the quartz crystal microbalance and the surface force apparatus, showed that Pvfp-5 adheres most strongly to the surface, and infrared spectroscopy detected a gradual displacement of water molecules only around the area where Pvfp-5 lands.

To better understand the structure and function of Pvfp-5, Miserez collaborated with Verma, whose laboratory at A*STAR specializes in structural modeling. Verma’s team built a three-dimensional atomic model of Pvfp-5 based on information gleaned from known structures of smaller protein fragments and then simulated its movement in water. 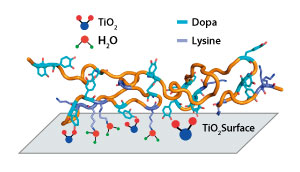 Comments Off on Getting a grip on mussel adhesion #Biohacking