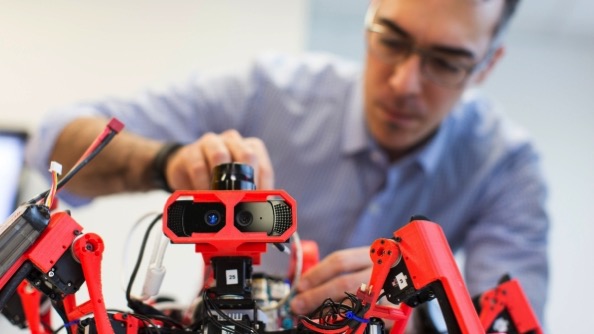 The next step in 3D printing could be something called mobile manufacturing. Siemens researchers in Princeton, New Jersey have developed prototype spider-like robots that can work collaboratively to print structures and surfaces, thus potentially accelerating production of large-scale, complex structures such as the fuselages of planes and the hulls of ships.

Large spiders have been spotted in labs at Siemens Corporate Technology’s Princeton campus. They have been caught depositing a thick, sweet-smelling, sticky material that appears to dry on contact to a smooth, shiny finish. Although ever more of the spiders are appearing, no one has sounded an alarm; and for good reason…

Instead of coming in from surrounding wooded areas, the spiders have journeyed from the virtual world, where they were conceived, to the very real world inhabited by people like Livio Dalloro, who heads the Product Design, Modeling and Simulation Research group in the Automation and Control Technology Field at Siemens Corporate Technology (CT). In Dalloro’s team, the spiders are known as SiSpis or Siemens Spiders, and they are recognized as promising representatives of what could someday be a new species of industrial worker.

“SiSpis are part of a larger picture that we define as Siemens Agile Manufacturing Systems (SiAMS) and they represent the core of our autonomous systems research here in Princeton,” says Dalloro, who explains that the spider-like bots are essentially fully autonomous additive manufacturing devices with legs. “We are looking at using multiple autonomous robots for collaborative additive manufacturing of structures, such as car bodies, the hulls of ships and airplane fuselages.” Additive manufacturing, also known as 3D printing, is a technology in which products or surfaces are created or refined by depositing layer after micro-layer of a selected material.
Collaboration is the Key

Of course, adding a layer of material to the inner surface of something the size of a ship’s hull is a job that would require more than just a few spiders. Most likely, hundreds would be needed. So the key question is: how would such an army of robots work together? The answer is a form of autonomy. “Each spider is capable of manufacturing only a small portion of a work piece,” explains Hasan Sinan Bank, who has played a leading role in the project and has filed multiple associated patents. “We are therefore trying to conceptualize and optimize the kinds of collaboration these robots should engage in.” This process is supported by algorithms developed by Dalloro’s team that allow multi-robot task planning so that two or more devices can collaborate on the additive manufacture or surface processing of a single object or area.

To accomplish this, the robots use onboard cameras as well as a laser scanner to interpret their immediate environment. Knowing the range of its 3D-printer arm, each robot autonomously works out which part of an area – regardless of whether the area is flat or curved – it can cover, while other robots use the same technique to cover adjacent areas. By dividing each area into vertical boxes, the robots can work collaboratively to cover even complex geometries in such a way that no box is missed. “No one else has attempted to do this using mobile manufacturing,” says Bank.