It’s no secret that we often steal the magic of nature for our own purposes, whether that’s literally in taking animals for their fur and other parts, often tragically, or in gently observing how they move and survive on a daily basis to come up with countless inventions we are able to call our own, generally with credit being given to the other deserving, fascinating creatures that walk (and swim) on Earth beside us. Biomimicry often plays a role in the 3D printing and robotics realm too and we’ve seen everything from butterfly wings inspiring more streamlined 3D printed structures for electronics to teams of bot spiders working together to complete projects, and more.

Now, researchers at The Swiss Federal Institute of Technology (EPFL) at Lausanne have gone to great lengths to study the Pleurodeles waltl, also known as the Spanish ribbed newt, and they have actually created a complex 3D printed robot which allows them to examine the amphibian closely. The hope is for part of a more noble cause in that with this research they will be able to translate some of this knowledge into helping paraplegic patients and amputees with creating improved neuroprosthetic devices—an area where both 3D printing and robotics have been heavily integrated of late.

Preferring to generally hang out in calm, deep areas of fresh water, this particular salamander enjoys preying on other tiny inhabitants like tadpoles, able to take his desired menu items by injecting him with a poison that is highly toxic (while only offering minor irritation to a human). They derive their name from their famous ribs that are so sharp they actually poke out of the body, delivering toxins. Although they can walk on land, they generally do not. This particular newt, however, caught the attention of the EPFL researchers because of both his amphibious nature and his skeletal structure, the main area where their interests lie in helping those with conditions most likely caused by injuries to that corresponding area in the human body.

Studies at the EPFL regarding salamanders have been ongoing previously but this will be the first time that they’ve used 3D tracking (like X-Ray videos) to understand exactly how the amphibian moves, noting 64 different points along its skeleton. Dubbed Pleurobot, the machine can walk, crawl, and swim. His ‘bones’ are 3D printed, complemented by motorized joints and a complete electronic circuitry that serves as his nervous system. And while his action (see video below) might still be considered a bit lumbering, the researchers are able to learn a great deal from Pleurobot’s motion and spine working together. This has been a work in progress, however.

The team recently released details of their project in a paper, ‘From cineradiography to biorobots: an approach for designing robots to emulate and study animal locomotion,’ by K. Karakasiliotis, R. Thandiackal, K. Melo, T. Horvat, N. K. Mahabadi, S. Tsitkov, J. M. Cabelguen, and A. J. Ijspeert—published in Journal of the Royal Society Interface. Here, they discuss the challenges in creating robots specifically to study animal locomotion. 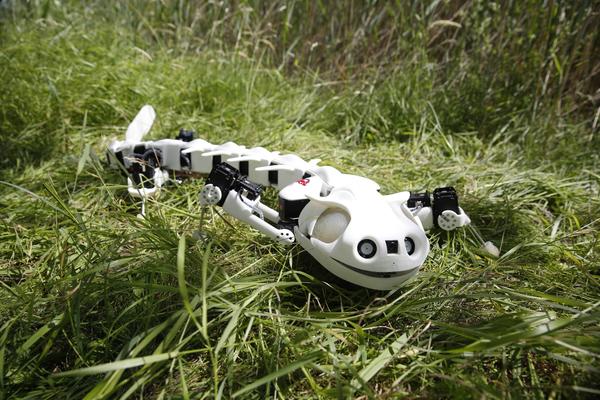