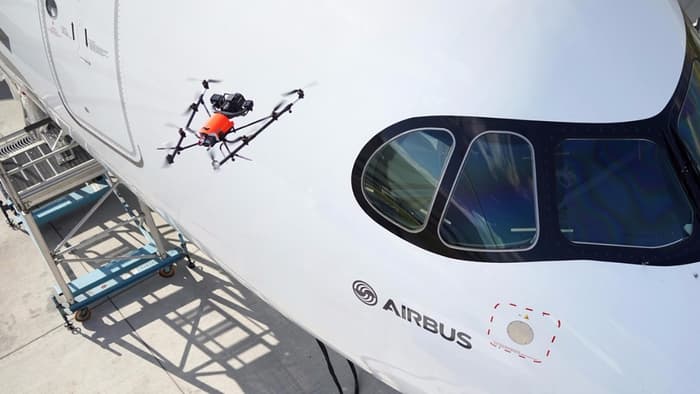 Understandably, drones aren’t usually welcome around airplanes, but Airbus is making an exception to that rule. The aerospace firm has been testing and demonstrating how drones can be used for quality inspection before planes are delivered to customers.

Previously, Airbus’ quality inspectors had to go up in telescopic handler vehicles to examine aircraft and make sure there were no “non-conformities” such as defects, scrapes or dents. This process was a laborious one, and could take up to two hours. Using drones, though, the company has shown how it has reduced that time to as little as 10 minutes.

Airbus worked with drone outfit AscTec to create a modified Falcon 8 drone with Intel RealSense cameras for intelligent obstacle navigation and a 42-megapixel full-frame camera for data capture. The drone is set to fly a predetermined route around a plane, during which it systematically and automatically take a series of photos. A human drone pilot supervises the flight and is able to take control if necessary.

Up to 150 photos are typically captured and these are then examined by inspectors as 3D models of the plane. It’s possible to zoom and pan around the images so as to look closer at certain areas, with the data said to ultimately help improve traceability, prevention and damage reduction.

In addition to making the process quicker and allowing images to be easily reexamined, the drones make it safer and more comfortable for inspectors, who will no longer have to be lifted up in telescopic handlers regardless of weather conditions.

The system is being tested on Airbus A330 and A350 aircraft, after which it is expected to be rolled out for use on all aircraft from next year. It’s being demonstrated at this year’s Farnborough Airshow in the UK, which runs until July 17.

Read more and see video of the drones in action here!