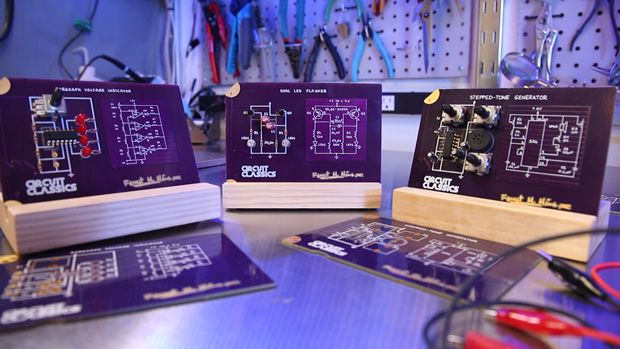 IEEE Spectrum did a nice write up of Star Simpson’s circuit boards honoring Forrest Mims. Star has been a friend of Adafruit for some time now and made some videos with Forrest that you can see here.

There are few authors whose handwriting is as well known as that of Forrest M. Mims. Many American engineers have vivid memories of his Mini-Notebooks and his larger work, Getting Started in Electronics. Initially sold in the 1970s only through RadioShack stores (where several titles can still be bought today), these books featured hand-drawn circuit diagrams of educational or interesting projects alongside hand-lettered explanations.

Mims’s folksy format did much to make electronics feel unintimidating. At the same time, his books gently cemented into readers’ minds what a properly drawn circuit should look like when the time came for them to take up the pencil.

Now MIT alum Star Simpson [above] is giving Mims’s work a fresh lease on life with printed circuit boards based directly on his notebooks. The diagram and explanation of each circuit and sometimes additional supporting text and charts—all still in Mims’s handwriting—are presented beside a printed set of traces and through holes that can be populated with supplied components to bring the classic circuit to life. After gaining the approval of Mims (“He’s been extremely supportive the entire way,” says Simpson), she went to the crowdsource site Crowd Supply to raise money to put the boards into production. She quickly raised US $37,698, far beyond her original goal of $9,750. “I’m delighted and amazed by the response,” Simpson says. “I think it’s a good sign that people are eager to learn about electronics today.”