‘Bearcam’ Study Brings Wildlife To You 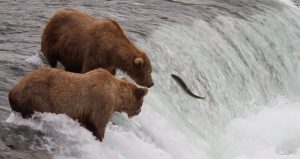 Two Kansas State University researchers, Jeffrey Skibins and Ryan Sharp, have launched a multiyear study of a brown bear live cam at Katmai National Park in Alaska. “Ultimately we want to know how viewers are affected by seeing something online—not having an actual experience, but having the virtual experience of viewing animals in nature,” Skibins said in a statement. “Does it create a conservation behavior action within the viewer? Does it cause people to want to get involved in saving these animals?”

The researchers began surveying park visitors, who had seen the bears in person, as well as webcam watchers who had seen them only online, as they could be several countries or even continents away. Both sets of questions are the same, and they are meant to assess whether the viewer “holds core values around preserving wildlife,” and if that changes after watching the bears.

“This reach and technology can really personalize the experience and allow a visitor—whether virtual or real—to be engaged in something that may be five continents away,” Skibins said. “It is an exciting new way to explore how people can access their national parks and wildlife around their country and around their world.”

Comments Off on ‘Bearcam’ Study Brings Wildlife To You