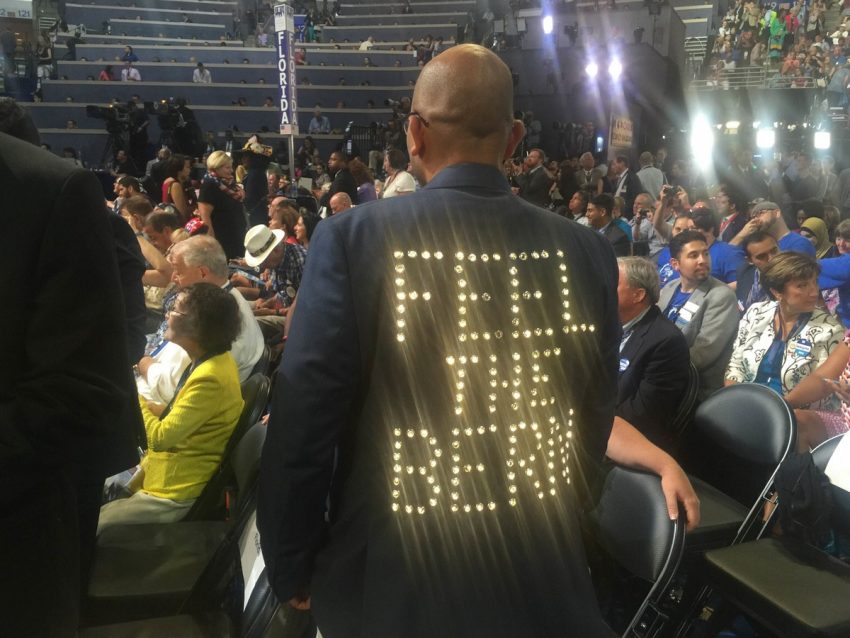 Right now in Philly most camera people are working at the convention for the various news outlets, so I was only mildly surprised when I received a text from a friend saying “wearable tech” with an image of a guy wearing a blinged blazer. Of course I attempted to ask my friend about the LEDs, trying to figure out whether the jacket was using neopixel strips, when my friend reminded me that he was 250′ away. Acck! Luckily Bustle managed to get a great pic along with an interview from Sanjay Patel, the delegate from Florida that was inspired to be the most visible at the convention.

All eyes were on Patel as C-SPAN’s cameras kept panning to him during Sarah Silverman’s speech.

Sanjay Patel is from Florida. He said he wanted to bring a little bit of Bernie to #DemsInPhilly. #teamTEGNApic.twitter.com/YlFDwZ6Yqa

Apparently Sanjay spent three days with his wife and a friend making the jacket. Another video I found on Youtube gave more detail, stating that they used grommets around the LEDs, which appears to be similar to the method outlined on Lina Wassong’s Instructable for her Sound Reactive Equalizer Skirt. The 150 LEDs on the jacket don’t appear to change color or pattern, so I believe they are just a simple circuit with battery packs. He did say they were originally going to use extremely bright LEDs, but it would have been much heavier. I guess that would have depended on the wiring, but nowadays with LiPo batteries and silicone wiring, I think it would have been fine. The point is, LEDs are a great choice for creating attention around a candidate or issue, so use them to your advantage. You can learn how to get started with LEDs in clothing with our learning guide on Adafruit LED Sequins. Sequins are LEDs that come in many bright colors. They don’t have the capability to change color, but they are one of the tiniest styles around, making them easy to incorporate in projects. With just a positive and negative, you’ll have them hooked up in no time at all. So, start deciding on a layout for a cool hat, scarf or even a decoration on your jeans. You can stitch ’em or solder ’em for some cool wearable tech. Make sure you share your pics with us on social media—we love to show off your work!