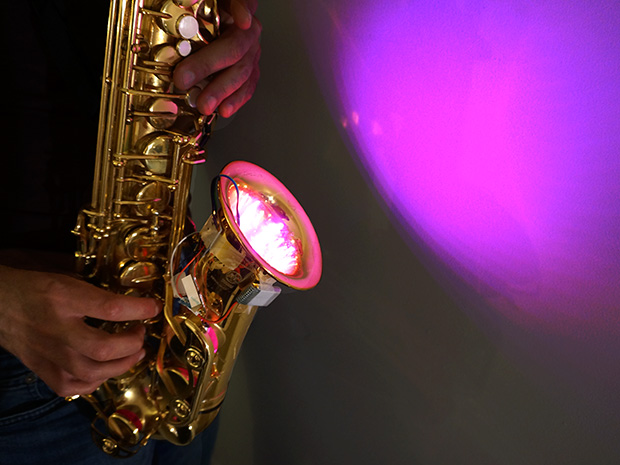 Via Charles Lohr on IEEE Spectrum

Several years ago, I wrote an algorithm I called ColorChord, which assigned colors to notes. The neat thing about it was that every time I played a note, the same color was assigned—regardless of the octave. By using these color values to control LEDs, I had a whole new way to visualize chords and melodies. Sadly, the algorithm was a bit clunky. The Pentium-based processors available at the time had difficulty running the algorithm in real time, forcing me to use specialized graphics processors.

Fast-forward a couple of years: A friend of mine dug into the algorithm and found it could be sped up enormously. Based on his feedback, I rewrote it twice. Eventually, it could easily run on a desktop CPU, and further tweaks and changes made it possible to run on a 168-megahertz STM32F407/417 microcontroller. Eventually, I wondered if I could run it on something even simpler—something as simple as a Wi-Fi bridge?

To be fair, I did have a specific Wi-Fi bridge in mind: the remarkable ESP8266 from Espressif Systems, based in Shanghai. The ESP was designed to be little more than a serial-to-Wi-Fi device that you could plug into your favorite controller and operate using AT-style modem commands to get access to wireless networks. However, the hacker community quickly realized that the ESP’s onboard processor could be repurposed for so much more.

The ESP8266 uses a Tensilica processor core, factory-set to 80 MHz but overclockable to 160 MHz. Its features include general-purpose input/output ports (GPIOs), Integrated Interchip Sound (I2S) interfacing with direct memory access (DMA) for speedy data transfers, hardware support for pulse-width modulation, and an analog-to-digital converter (ADC). It’s possible to make Internet of Things devices and servers possessing rich Web-based-configuration graphical-user interfaces with code running on the ESP. And with WebSockets, applications running on the ESP can provide updates to and receive input from remote users at a rate of over 600 hertz.