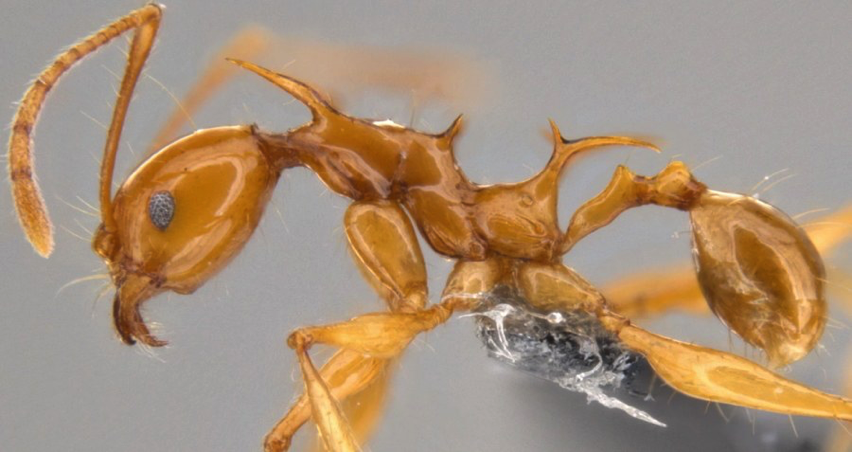 Via All That Is Interesting

If you recognize the scientific names of two new ant species discovered in the South Pacific — Pheidole drogon and Pheidole viserion — it’s because they are indeed named for the Game of Thrones dragons they so resemble.

Were you to read the discovery paper recently published in PLOS ONE, you’d be inundated with disorienting facts and figures until you reached the bottom, where you’d find two blurbs unlike anything you’d usually find in a science journal:

[Pheidole viserion] Etymology: The species name refers to Viserion, the cream and gold colored dragon of Daenerys Targaryen, a fictional character from the George R. R. Martin’s novel A Song of Ice and Fire.

[Pheidole drogon] Etymology: The species name refers to Drogon, the black-colored dragon of Daenerys Targaryen, a fictional character from the George R. R. Martin’s novel A Song of Ice and Fire.

When research team member Evan Economo noticed the ants’ coloring, as well as their spines resembling both wings and claws, he knew there was only one way to name these new creatures.

But these ants’ unique spines suggest more than their zeitgeist-catching names. While the working theory had long been that ant spines were used for defense, the new research suggests that these ants’ spines are used for something different altogether.

The researchers correctly hypothesized that the spines evolved differently in two different castes of these ants: major workers (who do most of the colony’s work) and minor workers (who do less). Major workers’ spines evolved in a certain way so as to support a greater musculature capable of supporting their abnormally large heads, which are used to break up large food sources to be spread among the colony.