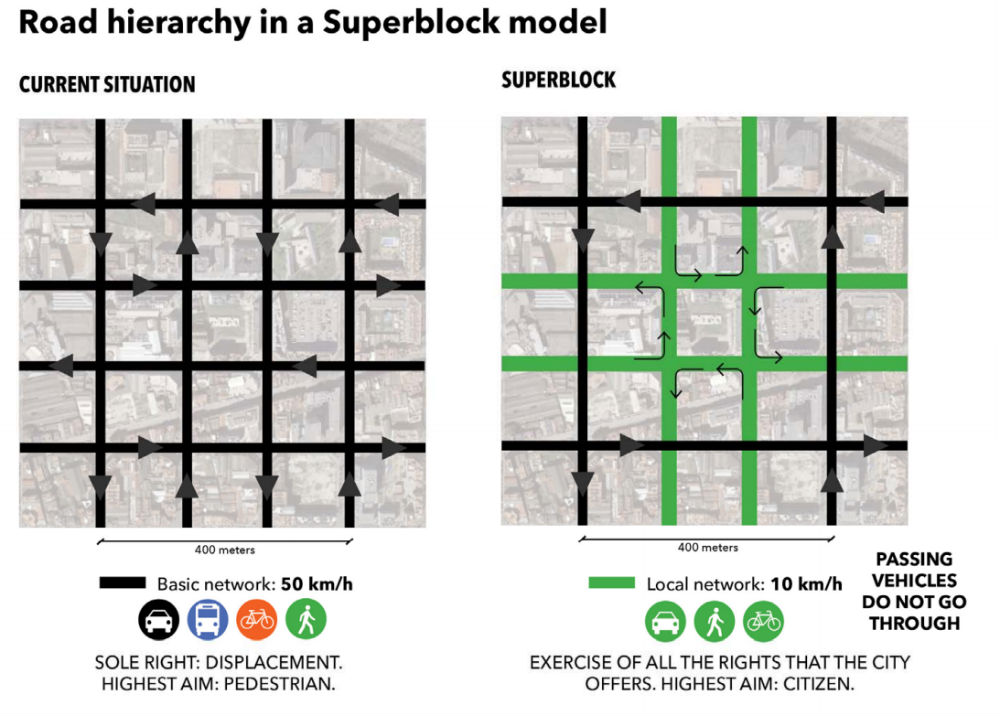 Barcelona’s plan to give streets back to residents, Via Cities of the Future

Barcelona wants to be the world’s best city for people. To reclaim the public space and community living that residents lost to cars over the last century, the city, in the spirit of the original design by Cerdà, is transforming mobility and access to public space by introducing the Superblock.

When Catalan urban planner Ildefons Cerdà i Sunyer, back in the 1850s, designed the Eixample, the expansion of Barcelona outside the old city walls, he envisioned a city based on community living, where people could interact on wide streets, with a wealth of public and private gardens, and where transportation of people and goods wouldn’t dominate public space.

As Geoff Boeing, of the University of California, Berkeley – Department of City and Regional Planning, wrote on his recent paper International Lessons from Barcelona in Linking Urban Form, Design, and Transportation: “Ildefons Cerdà’s 19th century utopian plan for Barcelona’s Eixample district produced a renowned, livable urban form. The Eixample, with its well-integrated rail transit, serves as a model of urban design, land use, transportation planning, and pedestrian-scaled streets working in synergy to produce accessibility,”

The Eixample is widely considered one of the best designed city areas in the world and a case study for urban planners. It is mentioned by leading architects, such as Jan Gehl –a global leader in people-centered urban design– in the same breath as Copenhagen and Lyon, as the epitome of a great European city.

What Cerdà could not foresee in his plan, approved by the city on 1859, was the arrival of the automobile and the resulting transformation of mobility that took place in the middle of the 20th century.

Fortunately, by the time cars became an important part of city life, most of the Eixample’s original plan had been executed, maintaining the “human scale” across the urban landscape.

In order to accommodate the surge in private car ownership, however, most of Barcelona’s streets became car oriented during the second half of the 20th century, reducing the space that pedestrians could use, and making it impossible to enjoy other activities on the street. The only “right” people could exercise on the street was mobility. Currently, Barcelona has 912 km (567 mi) of roads and streets dedicated to motorized traffic.

The situation has been getting worse in the past few years, and pollution –including particulate matter, CO2, and noise– have been rising to dangerous levels. The financial crisis also had a significant impact on the stock of motorized vehicles in the city, since people have been keeping their older, more polluting, cars longer. And, most importantly, Barcelona residents cannot use the streets that were originally designed for community activities because they are now dedicated to motorized vehicles.

The Barcelona government, however, has a new plan, which aims to reclaim most of the streets for the community, without reducing traffic flow. The plan is modeled on the original idea of the Eixample, and expands the area into “Superilles”, the Catalan term for Superblocks.

To understand better the concept of the Superblock, its origin, implementation, and the impact that it will have on the city, I sat down with Salvador Rueda, Director of the Urban Ecology Agency of Barcelona, and the designer and leader of the plan’s implementation.

Rueda said the idea of Superblocks came to him in 2002 when he was designing the new bus network for the city. Barcelona is still running bus routes that replaced the original tram network of the industrial age, designed to move workers from mostly working class neighborhoods to textile factories and back again.

In 2000, the city decided to study the possibility of a new more efficient bus network, reducing the number of routes, but keeping the same number of buses and increasing the frequency to cut waiting times and traffic.

Rueda and his team designed an orthogonal network of bus routes that it is being implemented today. The new system, when completed, will reduce the number of routes from 94 to 28, waiting time to less than five minutes, and trip time –with one connection– to less than 35 minutes across the city.

Comments Off on Superblocks, Barcelona Answer to Car-Centric City