From the New York Times: Obama to leave the White House a nerdier place than he found it 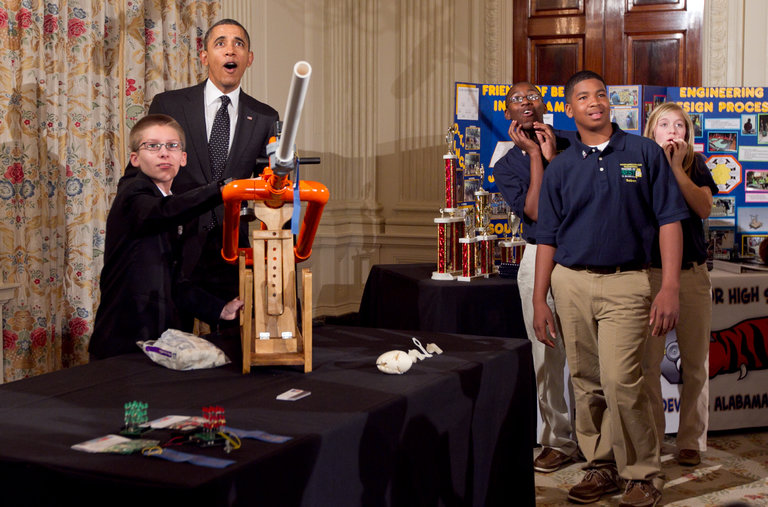 The New York Times has a piece outlining contributions to science that President Obama has made during his terms as president.

President Obama has started initiatives to study the brain and gene-based diseases. He has led attacks on the Ebola virus and antibiotic resistance. Last month, he wrote an academic article in a prominent medical journal.

But the science event many in the White House remember most powerfully was the kid with the marshmallow cannon.

“So would it, like, hit the wall up there?” Mr. Obama asked during the 2012 White House Science Fair when he came upon Joey Hudy, 14, standing before his homemade Extreme Marshmallow Cannon.

And so, for what may have been the first time since the British burned the house down in 1814, a fast-moving projectile hit the State Dining Room wall. The marshmallow did not stick.

Mr. Obama has changed in many ways since winning the presidency. His hair is speckled with gray. He is more skeptical of military solutions to intractable foreign problems. His teenage daughters, he has said many times, no longer think he is cool.

But another change that has received far less attention has been Mr. Obama’s embrace of science.

He began an annual tradition of science fairs, arguing that if he celebrates the nation’s top athletes at the White House, he should do the same for the best young scientific talent. He often mentions the students he has met at the fairs, including Elana Simon, who at age 12 survived a rare form of liver cancer and before graduating high school helped discover its genetic cause.

Mr. Obama’s presidential science advisory committee has been the most active in history, starting 34 studies of subjects as varied as advanced manufacturing and cybersecurity. Scientists on the committee said they worked so hard because Mr. Obama was deeply engaged in their work.

“These are sophisticated people who don’t usually get overenthused,” said Ralph J. Cicerone, the president of the National Academy of Sciences from 2005 until this June. “But it’s happened again and again.”

Dan Pfeiffer, a former senior adviser to Mr. Obama, said that he once viewed Mr. Obama’s science advisory meetings as time that could have been better spent on more urgent priorities. “But the president really looked forward to those meetings, and he really came out of them energized,” Mr. Pfeiffer said.

In a recent interview with Bloomberg Businessweek, Mr. Obama listed science as one of the few subjects he intended to pursue after the presidency.

“The conversations I have with Silicon Valley and with venture capital pull together my interests in science and organization in a way I find really satisfying,” Mr. Obama said. Of the potential breakthroughs in genomic sequencing, “That’s just an example of something I can sit and listen and talk to folks for hours about,” he said.

Comments Off on From the New York Times: Obama to leave the White House a nerdier place than he found it