Wil Wheaton has said that Michael Piller was ” I believe that he is more responsible than anyone else for Next Generation transforming itself into the amazing show it became in season four.” 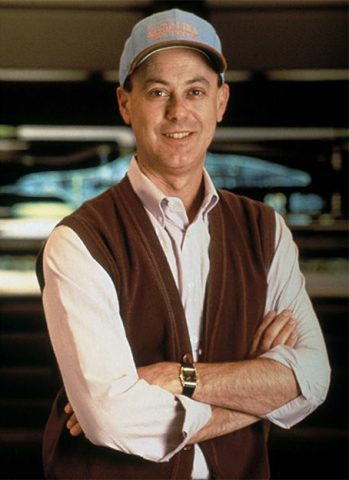 Michael Piller’s a wonderful writer, and we have him to thank for a description of Roddenberry’s Box in PIller’s legendary unpublished book on writing for Star Trek – via artiewayne.com:

My first time in Roddenberry’s Box was during the very first episode I worked on as head writer…I bought a spec script that had been sent in from an amateur writer named [Ronald D. Moore] who was about to enlist in the U.S. Navy…A female Starfleet officer is killed in an accident and her child, overcome with grief, bonds with a holographic recreation of his mother rather than accept her death.

I sent a short description of the story to Rick [Berman] and Gene. Minutes later, I was called to an urgent meeting in Gene’s office. “This doesn’t work” he said. “In the Twenty-Fourth Century, no one grieves. Death is accepted as part of life.”

It’s pretty difficult to write drama without interpersonal conflict and fear of death. Utopian fiction doesn’t tend to play out like a story — let alone a network TV show.

Roddenberry’s box does have its advantages. It pushes writers to explore new territory, creating morally courageous stories and new ways of looking at what it means to be human. Optimism isn’t common in any form of story telling beyond children’s literature, but optimism has always been part of Star Trek.

Michael Piller saw that. He transformed the young Ronald D. Moore’s idea into a story that preserved Moore’s vision and held to Roddenberry’s ideals.

“When the boy’s mother dies, he doesn’t grieve. He acts like he’s been taught to act — to accept death as a part of life. He buries whatever pain he may be feeling under this Twenty-Fourth Century layer of advanced civilization. The alien race responsible for the accidental death of his mother tries to correct their error by providing a replacement version of her. The boy wants to believe his mother isn’t dead, but our Captain knows she isn’t real and must convince the boy to reject the illusion. In order to do so, the boy must cut through everything he’s been taught about death and get to his true emotions. He must learn to grieve.”

The new approach respected Roddenberry’s rules and by doing so, became a more complex story. He gave his blessing. And I began to learn how Roddenberry’s Box forced us as writers to come up with new and interesting ways to tell stories instead of falling back into easier, familiar devices.