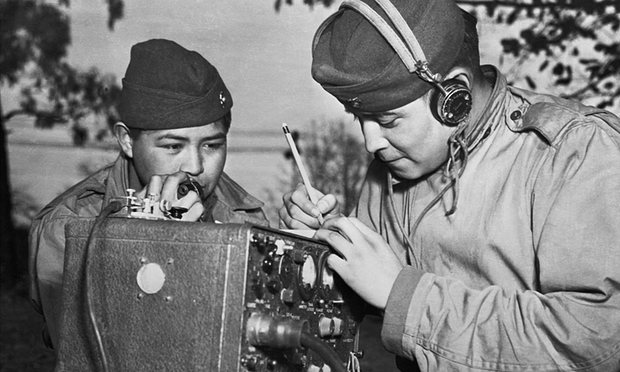 In 1982, August 14th was declared to be National Navajo Code Talkers Day. We celebrate the brave Native American servicemen on this day, via The Guardian

When Navajo servicemen used their native Indian language to create an unbreakable code, they helped the Allies get one step closer to victory over Japan in the second world war – a contribution celebrated on Friday as Navajo Code Talkers Day.

From 1942 to 1945, approximately 400 code talkers participated in every marine assault in the Pacific, as they transmitted important information by telephone and radio.

The idea to use Navajo for secure communication came from first world war veteran Philip Johnston, who had learned the language as a child as the son of a missionary to the Navajos.

The language is extremely complex. At that time, it had no written form either using an alphabet or symbols. Only approximately 30 non-Navajos understood the language when the second world war began. No Japanese citizens did.

The Japanese chief of intelligence, lieutenant general Seizo Arisue, admitted that they were able to crack the codes used by the US army and army air corps but never the Navajo code used by the US marines.

The code was created by the first 29 Navajo recruits when they developed a dictionary and words for military terms, all of which had to be memorized during training.

“Our Navajo code was one of the most important military secrets of World War II. The fact that the marines did not tell us Navajo men how to develop that code indicated their trust in us and in our abilities,” Chester Nez, one of the original recruits, told CNN.

John Kinsel Sr, a code talker for the 3rd division from 1942 to 1945, explained that no one knew what their assignment was during his service. The project was declassified in 1968.

“Not even the Navajo nation knew,” Kinsel said.

“The recognition of the code talkers came late, but it has been good for my Navajo people. I hope that this type of recognition continues across cultures,” Nez told CNN.