‘Making it Here’ – on Manufacturing in NYC, Now & in the Future #ManufacturingMonday @nycfuture

The Center for an Urban Future released a report last month titled, ‘Making it Here: The Future of Manufacturing in New York City.’ It touches on the history of manufacturing in the boroughs, and its future-potential, aided by 3D-printing, ‘makers of all stripes,’ and the somewhat overlooked contributions of the food manufacturing sector. 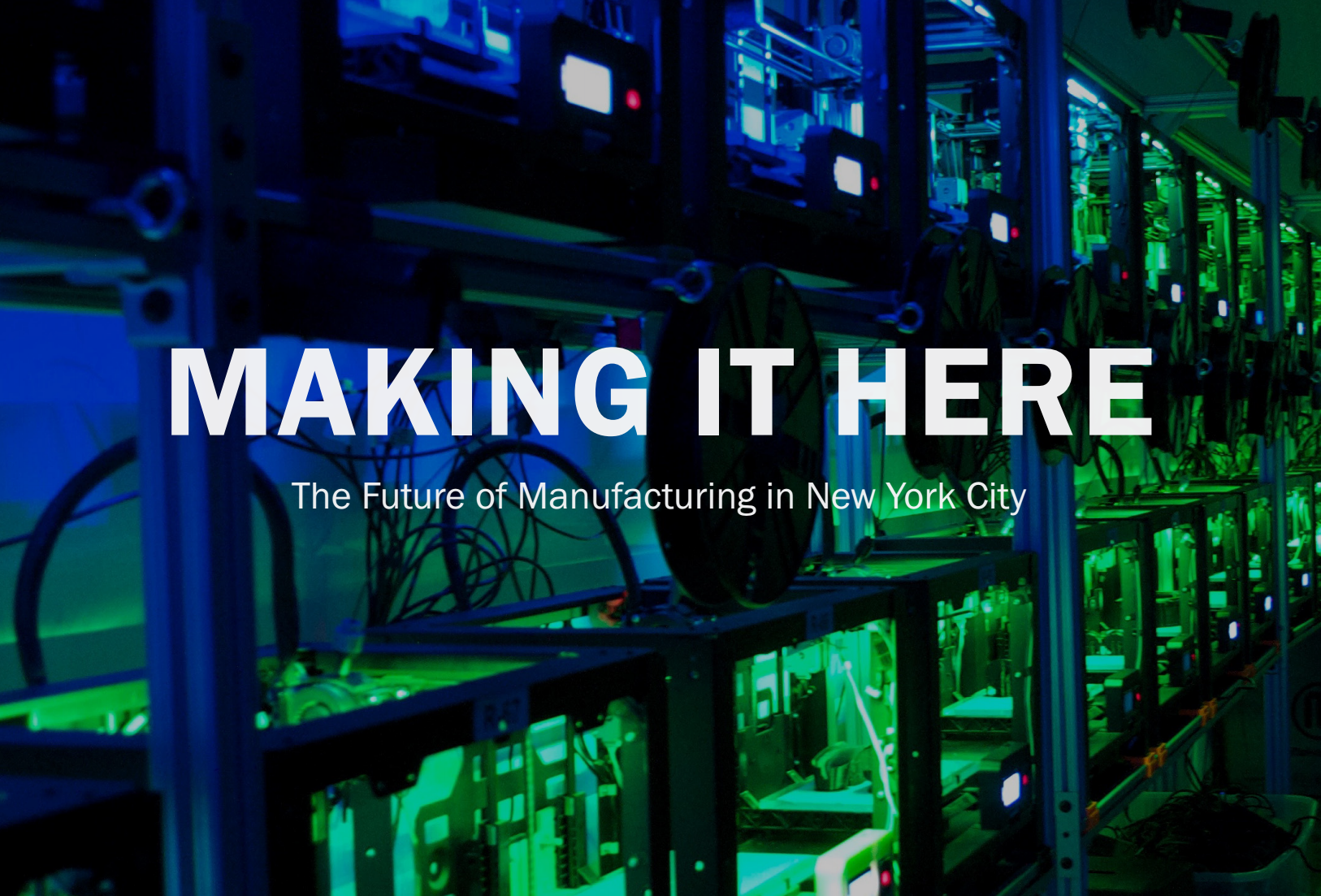 A new wave of modern manufacturing companies are adding jobs across New York City, breathing new life into a sector that had been left for dead. Three of the city’s manufacturing fields are particularly well positioned for growth in the years ahead: 3D printing, metal and wood fabrication, and food.

New York City’s manufacturing sector received another dose of bitter news in January when Cumberland Packing, the maker of Sweet’N Low, announced it was shutting down its Brooklyn factory and eliminating all 300 of its jobs in the borough. The decision was only the latest example of a large New York City–based manufacturer opting to close its doors or relocate operations out of the city, following recent exits by pita manufacturer Damascus Bakery, jewelry maker Frederick Goldman, Inc., matzo baker Streits, and adhesives manufacturer AP&G.

But unlike years past, the departure of traditional manufacturers like Cumberland is now being counteracted by a new wave of modern manufacturing companies that are adding jobs in the five boroughs and breathing new life into a sector that was all but presumed dead as recently as five years ago.

The city lost an average of 8,370 manufacturing jobs a year between 2001 and 2011, bringing the sector’s employment total below 75,000 jobs for the first time since the rise of the industrial city. But since then, from April 2011 to April 2016, the city’s manufacturing sector has grown by 3,900 jobs, including 1,100 jobs in the last twelve months. This hardly makes manufacturing one of the city’s leading growth industries. Manufacturing accounted for just 0.8 percent of the 513,500 new private sector jobs added citywide over the past five years and the sector now makes up just 2.1 percent of all private sector jobs in the city, down from 5.7 percent in 2000 and 9.1 percent in 1990. But it represents the city’s longest period of sustained manufacturing growth in several decades and a much-needed shot in the arm for a sector that still provides a crucial source of middle-class jobs.

This report examines whether this growth can continue and which segments of the city’s manufacturing sector offer the greatest promise. The report—the latest publication of the Center for an Urban Future’s Middle Class Jobs Project, a research initiative funded by Fisher Brothers and Winston C. Fisher—also assesses what obstacles might inhibit additional job creation in the sector and what government policies could help ensure that the city’s manufacturing revival continues.

We conclude that there is clear potential for additional manufacturing growth in the five boroughs. However, our research suggests that some parts of the city’s manufacturing ecosystem offer significantly more promise than others. In particular, we find that three sectors are well positioned for future growth: 3D printing, metal and wood fabrication, and food manufacturing.

Comments Off on ‘Making it Here’ – on Manufacturing in NYC, Now & in the Future #ManufacturingMonday @nycfuture