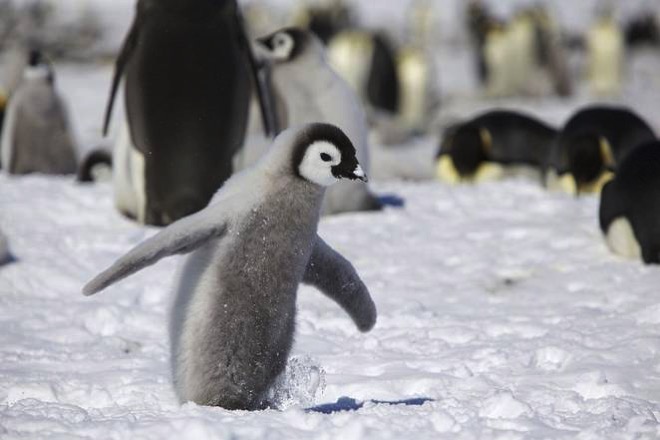 Despite living in frigid temperatures and getting wet, penguins’ feathers remain free of ice. How is that possible?

This is the puzzle Jingming Wang and his research team set out to unravel when they took a closer look at the feathers of the Humboldt penguin using a scanning electron microscope.

Humboldt penguins live along the western coast of South America where they swim in the frigid waters swept up from the Antarctic, yet their feathers remain immune to freezing. (For the record, the penguins pictured above don’t appear to be Humboldt penguins, but they sure are cute.) Scientists have thought that the feathers’ water repellency was at the heart of matter – water would slide off the surface before having a chance to freeze. But other research has showed that even under high humidity or exceedingly low temperatures, ice can stick to the most water-repellent of surfaces.

Reporting in the Journal of Physical Chemistry C, the researchers reveal that the answer is in the microstructure of penguins’ feathers. The feathers are comprised of “a network of barbs, wrinkled barbules and tiny interlocking hooks. In addition to being hydrophobic, this hierarchical architecture with grooved structures is anti-adhesive. Testing showed ice wouldn’t stick to it.”

You may know the story of how Velcro was invented: In 1941 Swiss engineer Georges de Mestral went for a walk in the woods and became inspired by the tenacity of the burrs clinging to his pants and dog; eight years later he successfully reproduced the natural attachment with two strips of material, one with thousands of tiny hooks and another with thousands of tiny loops. It is the textbook example of biomimicry, in which nature serves as muse for innovation. The anecdote predicts the plot-line for what Wang and his team did next.

Based on their discoveries about the feathers’ microstructure, the scientists recreated the design in a nanofiber membrane that could be developed into an ice-proof material, which they say could potentially be used in applications such as electrical insulation.

Comments Off on Why don’t penguin feathers freeze? #Biohacking