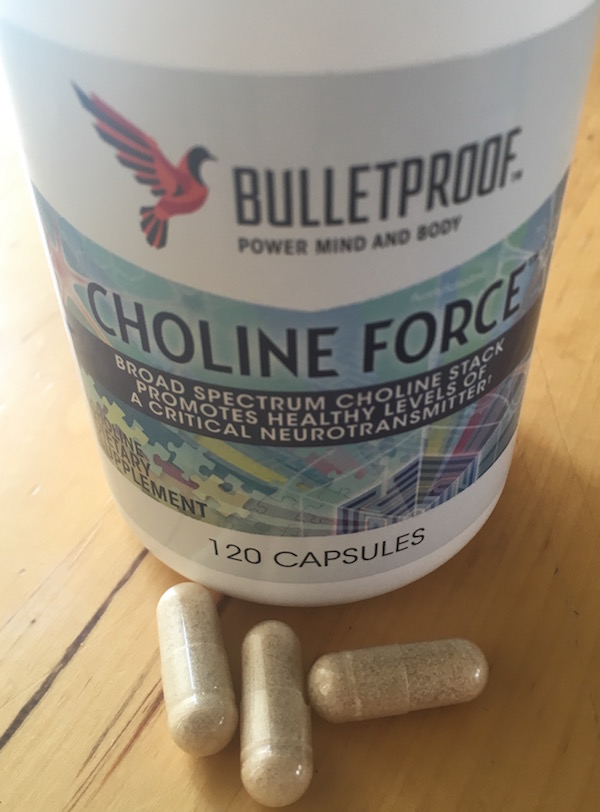 Choline has become one of my goto daily supplements due to it’s powerful effects on memory and focus. I’m particularly fond of Bulletproof’s Choline Force which is 500mg of choline bitartrate. This is a core supplement for many smart drug stacks which make use of other nootropics from the racetam family. Choline can help to prevent headaches. Pure Nootropics has a great write up on what choline is, how it can help cognitive performance and the different varieties of choline which can be used.

Entering the world of neuro enhancement is fun and rewarding, but nootropics aren’t necessarily the first place that you start. Your brain functions optimally with certain chemical balances, but diet plays a huge role in neurotransmitter regulation. In the case of enhancing your cognitive ability, remembering and learning better, choline is a great nutrient to include in your diet in adequate amounts. There are plenty of food sources (more below) that provide choline, but users of nootropics (and racetams especially) often need to supplement with a bit more.

What follows is a beginners guide to help you understand choline from a practical perspective, how it is related to racetams, how it improves cognitive performance and a few steps in the right direction for supplementation.

Quick note: we provide a choline supplement that we feel has the best acetylcholine precusors available because it contains Alpha GPC and CDP choline in it; feel free to check out our Optimal Choline Complex if you’re interested in a well rounded choline supplement!

Choline is a water soluble essential nutrient that has extreme importance for the health of cell membranes. It is an essential part of every person’s diet because it is the precursor for the neurotransmitter acetylcholine. This neurotransmitter is responsible for memory and muscle control yet some studies show that 10% or less of the population consumes adequate choline. Although the body synthesizes some of the choline that it needs, the diet provides the substantial amount required for health.

Studies show that hippocampal acetylcholine levels are reduced in users of piracetam (and other racetams) because of increased acetylcholine uptake and mobilization. Other research showed that increased choline consumption (through food or supplementation)works synergistically with these neuro enhancers.

Most people don’t get enough choline in their diet, which causes cognitive problems alone. However, taking racetams without the proper choline consumption can cause headaches and further brain-related problems.

Choline alone has the power to impact cognitive ability greatly as evidenced by a study in the American Journal of Clinical Nutrition in 2011. The study of 1400 dementia-free subjects over 4 years tested verbal memory, visual memory, and verbal learning over time. It also measured white-matter hyperintensity and brain atrophy, which are both associated with Alzheimer’s disease and impaired cognitive function.

Memory and learning are greatly influenced by choline consumption alone. If you have problems with memory and learning, you may require increased choline supplementation rather than racetams.

Types and Sources of Choline

There are many types of choline that your body can utilize as a precursor for acetylcholine production. Each has varying strength and advantages / disadvantages. Understanding the interaction between each choline type can influence your diet and other decisions.

This source of choline is one of the most common yet least impactful. Foods like eggs and soy products are filled with lecithin. Even processed foods like chocolate have lecithin added, but choline content is low. As the weakest form of choline, lecithin may not provide enhanced cognitive abilities or prevent neuro degeneration similar to other sources. Supplementing with lecithin typically requires higher dosages to significantly increase acetylcholine levels.

CDP-choline is a more efficient source for providing the acetylcholine precursor. Alone, the CDP-choline has showed great efficacy in solving cognitive decline in elderly patients with Alzheimer’s disease. The neuroprotective actions of CDP-choline, along with the ease of passing the blood-brain barrier, makes this an efficient source of choline. Improved learning and memory, along with increased noradrenaline and dopamine levels, make CDP-choline a useful / powerful supplementation for brain health.

The Alpha GPC form of choline is one of the most potent. It can be found in the brain and in dairy products, but is typically produced synthetically by purifying soy lecithin. Like, CDP-choline, daily supplementation of Alpha GPC need not be high. It is used to enhance memory and learning for Alzheimer’s and dementia patients.

The choline bitartrate “choline salts” are one of the cheapest sources of choline. It is a weaker choline source than CDP-choline or Alpha GPC, but still provides effective cognitive enhancement if dosed properly.

Ensuring adequate choline consumption does not require supplementation if you are prepared to eat certain foods that are rich in this essential nutrient. Plenty of food sources provide choline, but consuming these foods daily can cause other health concerns. Here are some of the best known foods that contain choline along with some efficient sources you may have never thought of.

1. Egg yolks (egg whites do not have high concentrations of choline)
2. Liver – beef, chicken and turkey liver are all good sources of choline. Beef is the best.
3. Turkey heart is a good source of choline
4. Milk / dairy products – lower fat content increases choline

1. Any caribou meat (don’t ask where to get it!)
2. Of grains, quinoa and amaranth have the most choline
3. Bacon
4. Edamame and cruciferous vegetables are the best vegetable sources, but still don’t provide much compared with any animal source

People who don’t consume enough choline often have a cognitive disadvantage when it comes to learning and recalling memories. Long term brain health can be compromised by chronic lack of choline. Those who are willing to change their diet should include more foods that are high in choline, such as eggs and organs from animals. Organ meats can be found at the local farmer’s market, but if you are feeling a bit squeamish, use dairy products like milk instead (low fat milk has more choline).

For vegetarians and vegans, consuming enough choline can be a near impossible task. Unless committed to a diet very high in cruciferous vegetables, most vegetarians / vegans will not get adequate choline for good health.

You can find normal recommended doses based on gender, age, and other factors. Users of racetams should consider supplementation in the following doses (courtesy of /r/Nootropics)

Recommended starting point: 2,500 mg in the morning or at night

Comments Off on Nootropics Biohacking: The Beginners Guide to Choline