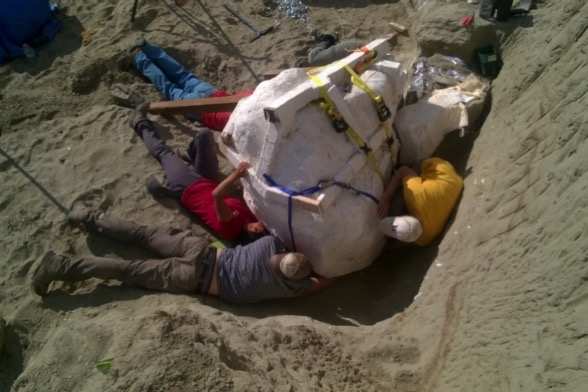 There’s a new Tyrannosaurus rex fossil on the block, with a cute nickname and about 20 percent of its former body intact, including a well-preserved skull.

The T. rex was found by paleontologists from Burke Museum and the University of Washington (UW) in Montana’s famous dinosaur-fossil haven, the Hell Creek Formation. It has been dubbed the “Tufts-Love Rex,” in honor of the volunteer paleontologists who first noticed bones jutting out of a hillside: Burke Museum’s Jason Love and Luke Tufts.

The Burke and UW researchers say they were able to unearth roughly a fifth of the animal, including ribs, hips, jaw bones and vertebrae. (They’ll search for more pieces of the iconic beast next summer.)

But the centerpiece of the find is the skull, which is about 4 feet long. So far, the scientists can see the right side of the skull — from base to snout, including teeth — and they think it’s likely the left side, now trapped in rock, is intact too. (They’ll begin the painstaking process of removing the remaining rock in October.)

The researchers estimate Tufts-Love lived about 66.3 million years ago, making its living toward the end of the Cretaceous Period, not geologically long before a mass extinction wiped out the dinosaurs. They also reckon, due to skull size, that the T. rex was 15 years old when it died, putting it about halfway through a typical T. rex lifespan.

The fearsome meat-eaters, with enormous jaws and razor-sharp teeth, were around 40 feet long and stood up to 20 feet tall. This find, the researchers say, would have been the height of a city bus at its hips and as long as one from head to tail-tip.

Tyrannosaurus rex fossils are uncommon finds, and even more so are well-preserved skulls. The UW and Burke team said their find marks just the 15th fairly complete skull in the world.
The skull is currently encased in a plaster jacket, the whole package weighing about 2,500 pounds. The plaster cover kept the Tufts-Love Rex intact during a move from its longtime home on a Montana hillside to its new digs at the Burke Museum in Seattle. (See video below for its arrival at the museum.) There it will go on display, still in the plaster casing, for a quick look by the public before going into long-term study by scientists beginning in October.

Just separating the skull from the rock that surrounds it could take more than a year, the researchers said.