This project by forums user jules999999 went through several designs before landing on the current build using Adafruit FONA, an Arduino Mega, and Music Maker shield, but the chassis has always remained the same: a 1930s-era type 332 GPO telephone. Read this forums thread to see how jules999999 arrived at some conclusions with this build.

Interestingly, on the project website the phone’s centrifugal brake is labeled as the ‘governor‘ – the same name of the braking system in some of Charles Adler’s same-era automotive inventions; I’m going to look up this device and patent and see what else I can find! 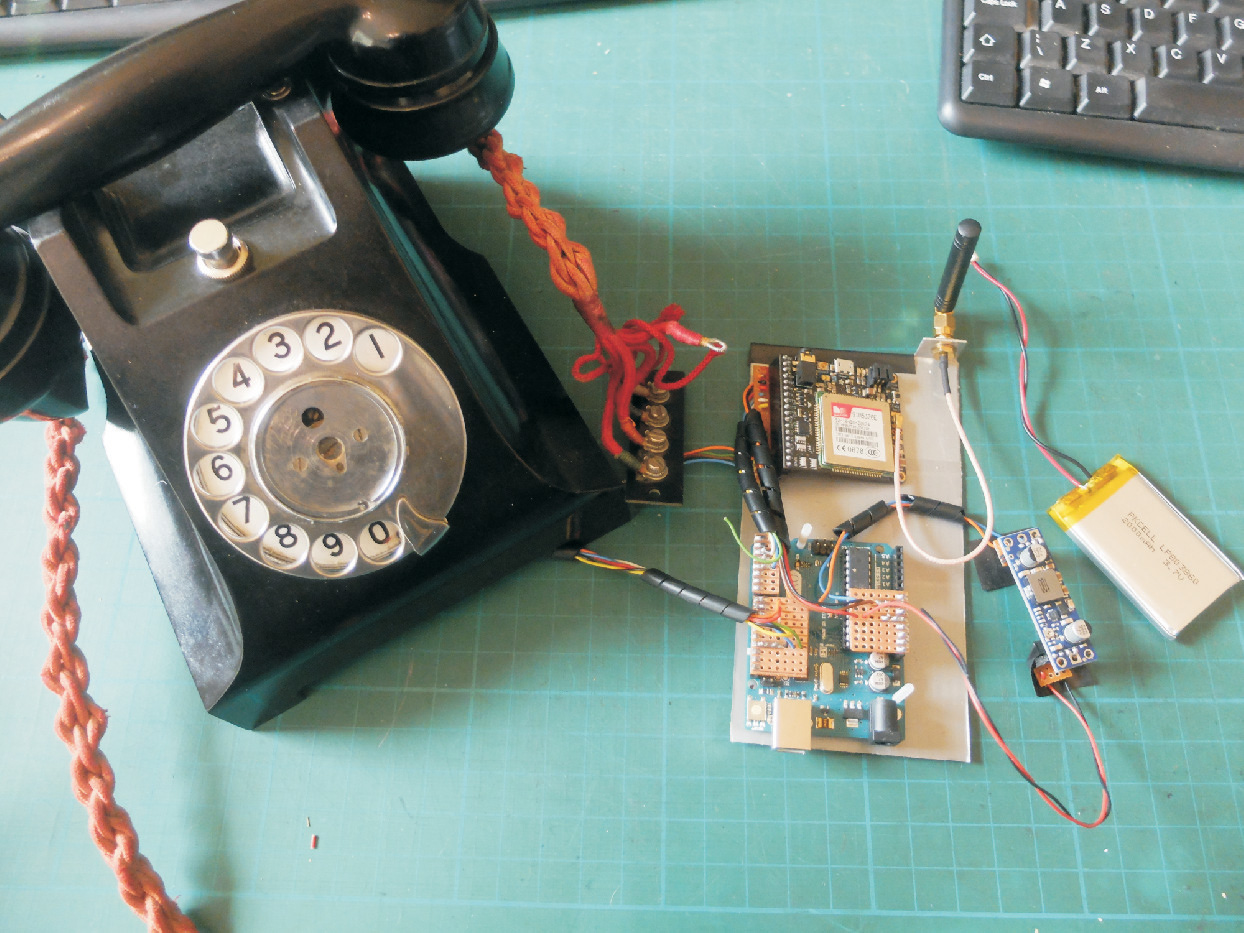 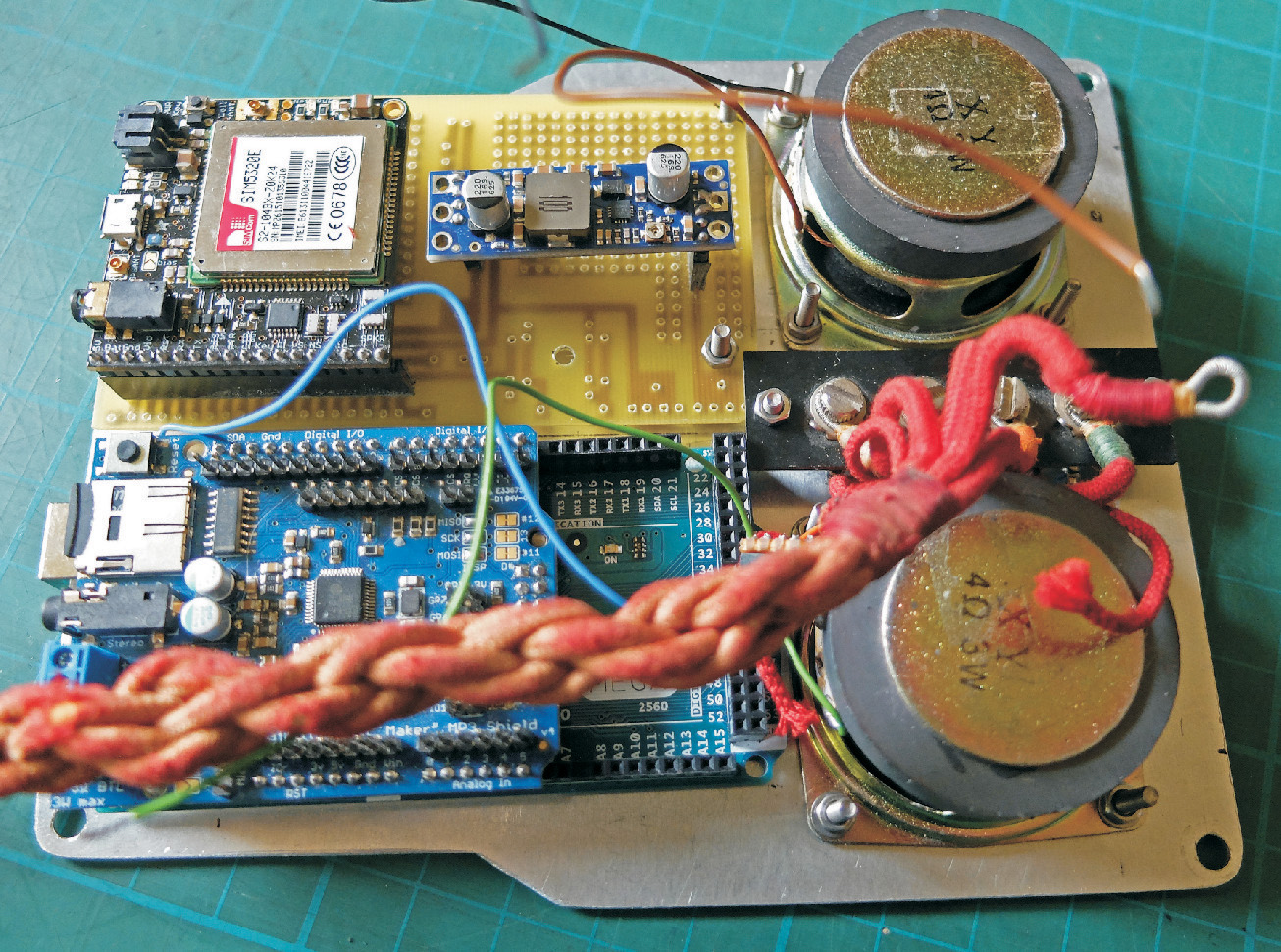 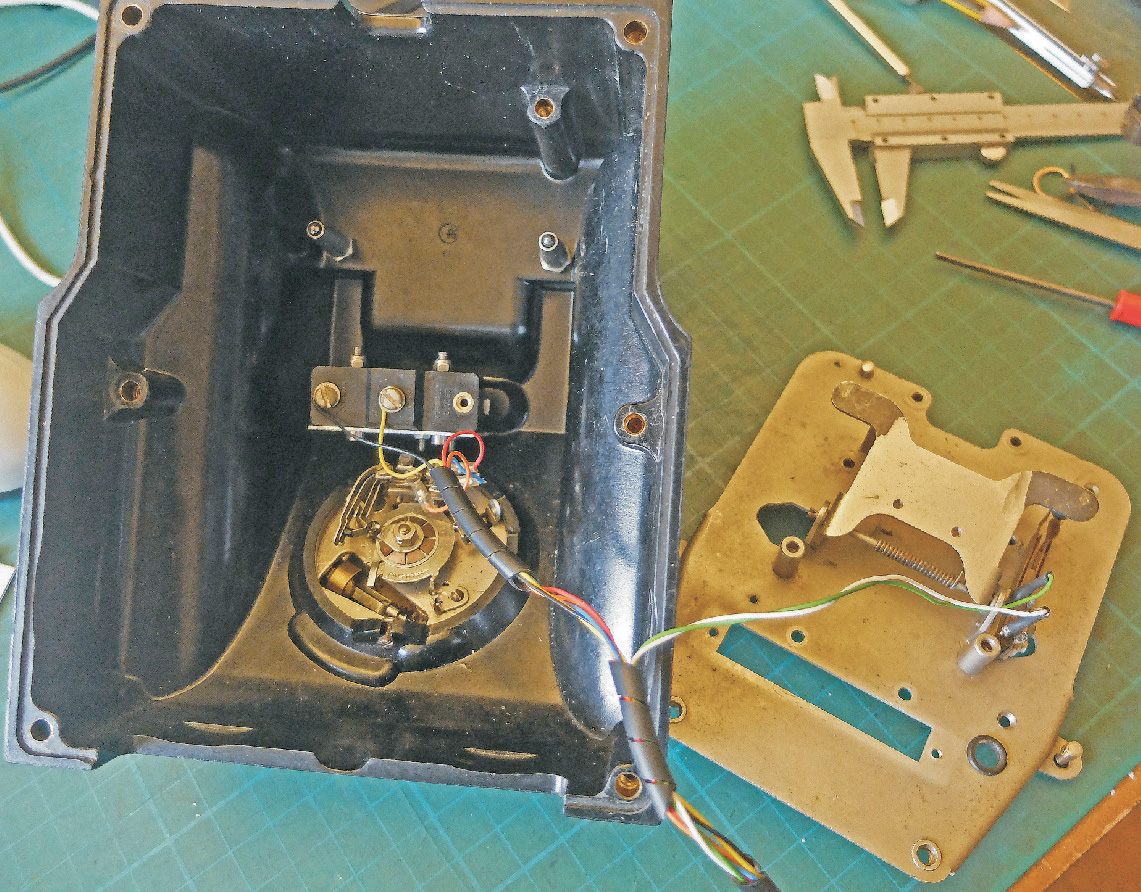 Hi
Yes, I’ve managed to get the dialler working with the FONA. The dialler basically consists of a pulse switch and a switch to indicate the end of a pulse train. Also there is a switch which opens when the handset is off the cradle. With these as Arduino inputs, it is relatively straightforward to count the pulses and add them to an array. I had to add a button to call the number when the dialling was completed. When this is pressed, the stored number is fed into the FONA library call routine. Pressing the cradle switch disconnects the call.
At this stage I have found that the speaker is much too loud to be held to the ear (even at volume’1′) so I need a series resistor. Conversely, the microphone does not seem sensitive enough so I have ordered an Adafruit amplified microphone. I am assuming that I will just connect the microphone ‘+’ on the FONA to the output of the amplifier via a capacitor (which way round, polarity-wise, needs to be determined) and use the ground as a common connection, leaving the microphone ‘–’ pin unconnected.
I am now on the next stage using an Arduino Mega with an Adafruit Music Maker. I have been trying to avoid devices such as LCD screens or LEDs to retain the vintage feel of the phone. Instead, I am hoping to use audio cues to indicate the status of the system, for example, a dialling tone to indicate whether the FONA is connected to a network when the handset is picked up off the cradle. The SD card can store pre-set numbers and audio cues. At the very least, I should be able to incorporate a dial operated MP3 player!
I am documenting this project at http://www.mr-r.co.uk/oldphone1.html if anyone is interested.

Arduino Mega 2560 R3: The Arduino Mega 2560 is a microcontroller board based on the ATmega2560 (datasheet). It has 54 digital input/output pins (of which 15 can be used as PWM outputs), 16 analog inputs, 4 UARTs (hardware serial ports), a 16 MHz crystal oscillator, a USB connection, a power jack, an ICSP header, and a reset button. It contains everything needed to support the microcontroller; simply connect it to a computer with a USB cable or power it with a AC-to-DC adapter or battery to get started. The Mega is compatible with most shields designed for the Arduino Duemilanove or Diecimila. Read more. Adafruit “Music Maker” MP3 Shield for Arduino: Bend all audio files to your will with the Adafruit Music Maker shield for Arduino! This powerful shield features the VS1053, an encoding/decoding (codec) chip that can decode a wide variety of audio formats such as MP3, AAC, Ogg Vorbis, WMA, MIDI, FLAC, WAV (PCM and ADPCM). It can also be used to record audio in both PCM (WAV) and compressed Ogg Vorbis. You can do all sorts of stuff with the audio as well such as adjusting bass, treble, and volume digitally. Read more.