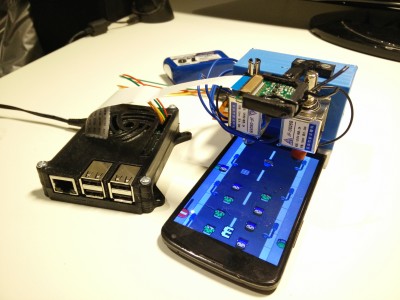 Kristian Lauszus took a course about image analysis in which students were asked to create a project to do the analysis. They were allowed to use OpenCV but none of the in-built filters – everything had to be done from scratch. Kristian’s project focused (literally) on a smartphone screen playing a simple game. In two columns, humans and zombies move downwards to the bottom of the screen. Zombies need to be taken out using screen taps and humans must be left alone. The project took photographs of the screen and then used image filtering techniques to remove everything but green. A set of solenoids were then programmed to “touch” the screen to remove the zombies.

It’s a hell of a project – and you can read more on Kristian’s blog. He has published his paper, in which there is much more technical detail here and all the code and documentation is on his GitHub account.