StarCraft II features some ambitious armor, but the challenge didn’t put off Mike Wiggins, a.k.a. RedRock Cosplay and Props. He made the CMC marine armor from the game, as worn by Jim Raynor, General Warfield, and many other characters. He began the design phase way back in May of 2015 and just wore the costume to Salt Lake Comic Con over Labor Day weekend 2016. You can get an idea of the scale of the build in the above video. Not surprisingly, Wiggins took home the grand prize at the costume contest.

He created an extensive build thread for the project at The Replica Props Forum (RPF). The armor has movable parts, a motorized double visor, and LEDs and was crafted mostly from EVA foam. It’s a work of art, and I highly recommend flipping through the entire process at The RPF to see how the costume came together.

Update: You can also view this build video: 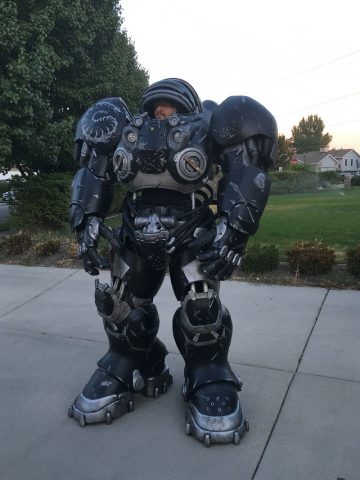