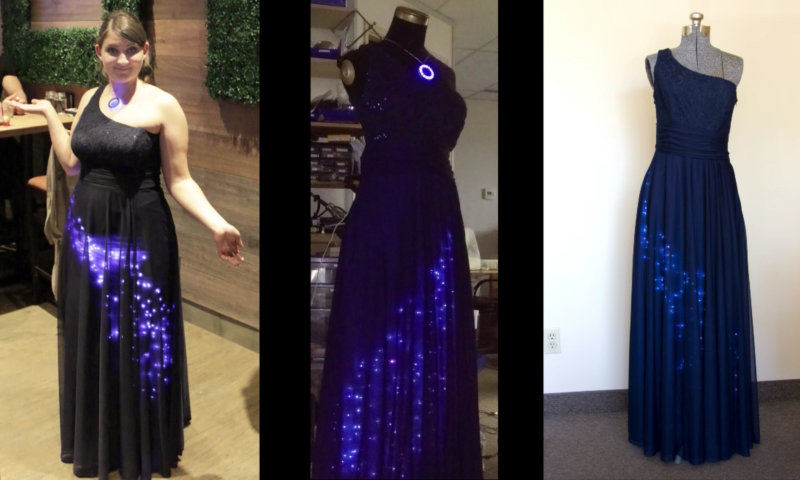 There is nothing grander than pimping out a long gown with LEDs for a prom or formal event. At first it seems like a great idea, but then you figure out it’s harder than you imagined figuring out how to put LEDs onto fabric, where to put power, and how to make it possible to sit with all that tech on your derrière. Hackaday blogged a great example of Dave Hrynkiw and his daughter making multiple prototypes of a Starry Night dress to get the perfect combo of fashion and tech. Here’s what you need to know with a few comments from my own experience making wearables.

Sewing May Not Be the Best Option

Conductive thread does exist, but it loses power over distance making wire a better choice for long runs on fabric. I’m a big fan of silicone wire, which not only flexes like spaghetti, but it is comfortable for wearables and won’t short on your skin. Dave mentions the problem of working directly on the underskirt of a dress as well. Notice that even when using wire, tacking it in place with thread starts to pucker the fabric, giving the dress a bunched up look even through the top skirt. It also is hard to stitch because the top skirt is in the way. Don’t feel bad, this is merely a prototype in the picture using a dress from a thrift shop, which is also a good idea! 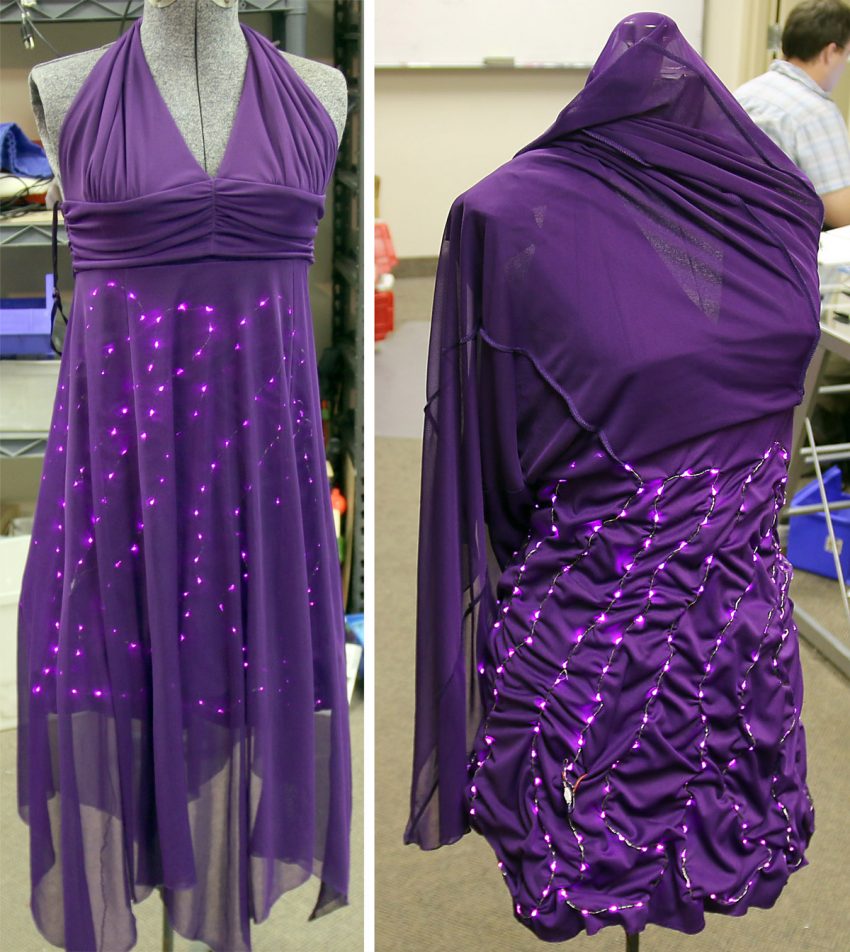 One of the issues with permanently embedding tech is that it gets hard to troubleshoot if it is stitched into a dress. So, try creating channels by stitching pockets to hold tech, whether it be for LED strips, stranded LEDs or batteries. That way you will only be frustrated with fixing the issue, not getting access to it. I did the same for my Hunger Games Dress by stitching channels onto a petticoat. In fact, I made sure the channels had multiple breaks throughout the dress giving even more access to the LED strips. Using a slip/petticoat is a great way to make the electronics accessible and it also poses no threat to the fabric of the dress. You can even use hot glue to attach LEDs chains onto a slip/petticoat. The slip can be fastened onto the dress with buttons as Dave did in his Starry Night dress, or it can just be worn separately. If you can, try to choose one that is made of cotton because it will be a lot easier to stitch. Of course, that is only okay if you don’t plan on wearing stockings as it may cling. 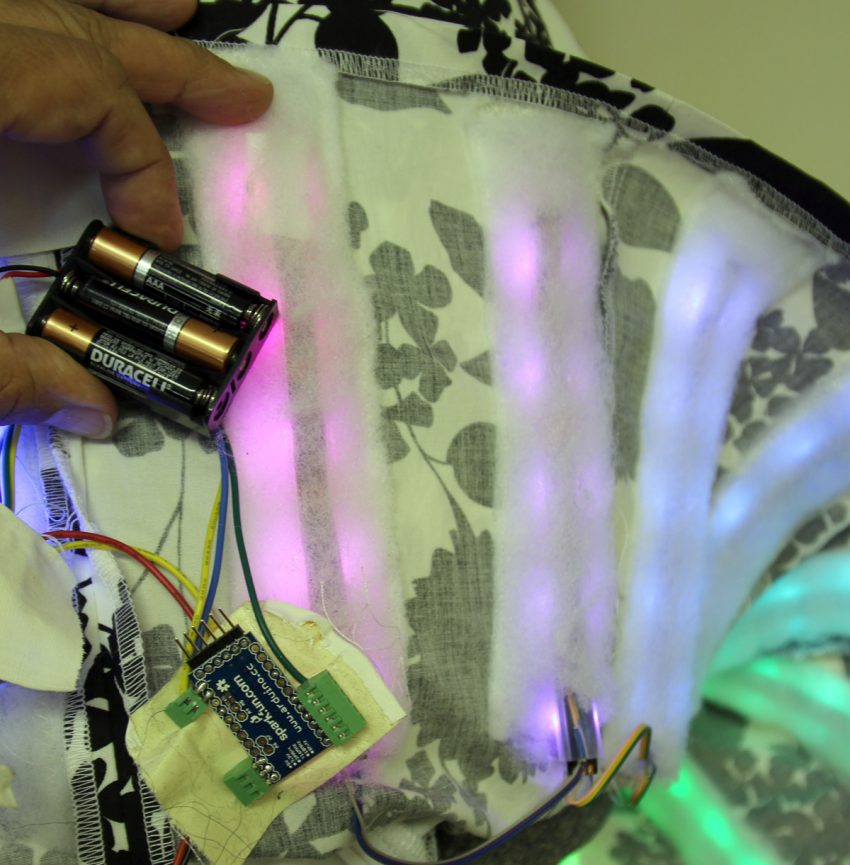 Diffusion is Your Friend

LEDs tend to be bright even when dialed down through code in the Arduino microcontroller. So, it’s best to diffuse them using texture and distance. In the example above, Dave used batting, which is often used in quilt-making, to soften the harsh lights to a soft glow. You can also use bubble wrap, silk and chiffon. I’ve even used faux fur in my Northern Lights Cowl. There is something more magical when you blur the lines of the LEDs because it loses the obvious tech. Another way to get this effect is to create distance between your dress and the LEDs, which can be done either by using a slip, or by strapping the tech directly on the legs (don’t laugh, I’ve seen this done and it actually works!). 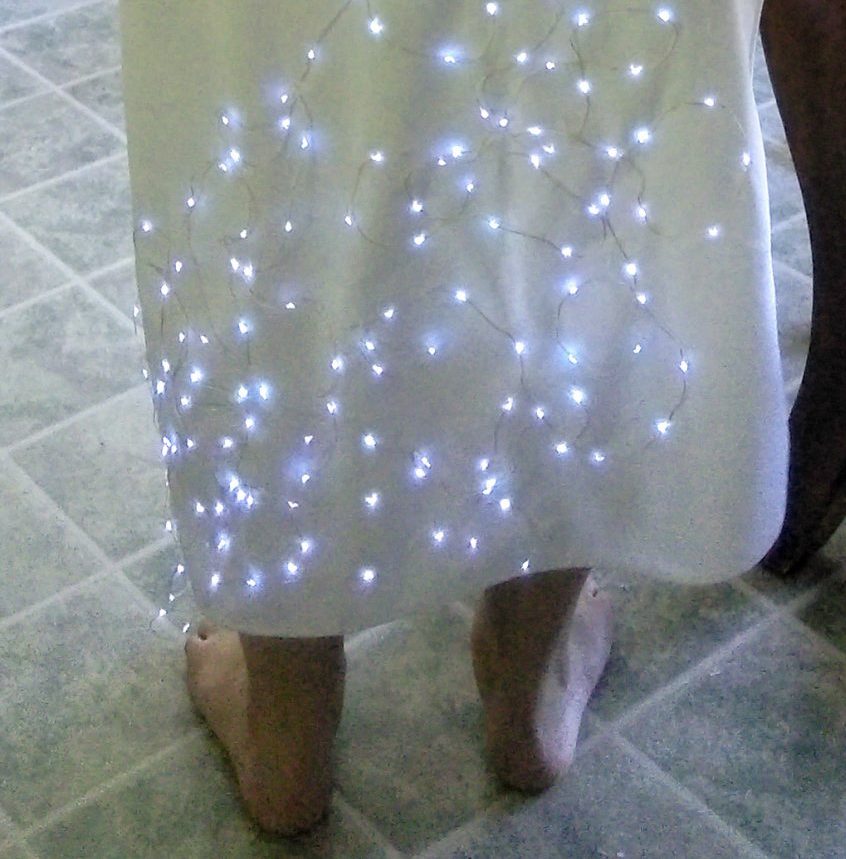 Give the Battery Pack Support and Play It Safe

When lighting a lot of LEDs you are talking power, so you are probably using multiple battery packs (like AAAs) or a LiPoly. You might think placing them in the hemline is a good idea, however, I can assure you that they will be seen and cause your dress to look droopy. So, mount your packs in a sturdy area like the waistline of a dress, or on the upper half of a slip/underskirt. I had a friend wear one on her thigh as a garter for her Disney inspired “Belle” wedding dress! You can create a simple pocket from some felt or use stitchable velcro inside the dress with adhesive velcro on the battery pack. If you are using LiPoly batteries it is always a good idea to make sure they are covered and away from the body should you fall. I’ve never had a bad experience with them and they are the lightest, but it is always good to be safe when dealing with electricity.

In the end, the best wearable is well thought out. Dave and his daughter spent a lot of time planning in order to create their masterpiece. Notice the LEDs are placed perfectly in a diagonal avoiding the area which would be used for sitting. The slip makes the gown comfortable and also creates distance for the LEDs to give them diffusion. It also makes things easy to fix should a problem arise. The battery packs are undetectable and all that remains is a beautiful flowing version of the Milky Way. Finally, using a natural image for inspiration gives this gown its mysterious artistic quality. A big thanks to Dave for some great documentation and as for the rest of you, hopefully you are going to save a lot of time on your lux gown project now that you’ve seen these pro tips. So, I leave you with my fave Silicone Wire that is ideal for wearables. Start sketching your design now so you can see how to best implement your circuit. Halloween is coming!