Teufelsberg is inspired by a Cold-War era listening station in Berlin. The track makes interesting use of samples made at the abandoned site and showcases William’s creative use of his modular synth.

From Rex the Dog:

[Teufelsberg is]  this huge Cold War structure, set up to intercept communications coming out of East Germany. 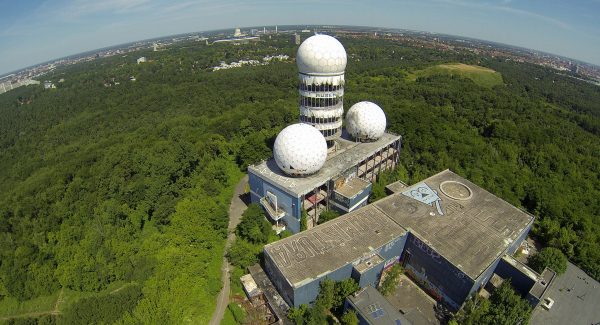 There are two smaller domes, which are quite torn up and interesting. But, if you climb nine stories, you get to the largest dome, which is really the main event.

The acoustics are super spooky – any little sound just goes berzerk. I recorded only about 5 minutes in there, but when I went through the recordings there was this kind of short howl sound – a combination of the wind hitting the edge of a hatch and people on the stairs. I put it in the sampler, and it plays the main melody of the track. Pitched down through a reverb it sounds really mournful, but when you pitch it upwards it seems to really take off.

The audio is live, each instrument is routed to a Mackie LM-3204 mixer and recorded separately… [The] sampler I built on a synth-hacking course a couple of years ago. I built a second one because the first one didn’t completely work, but they’re good and I made face-plates for them, too.