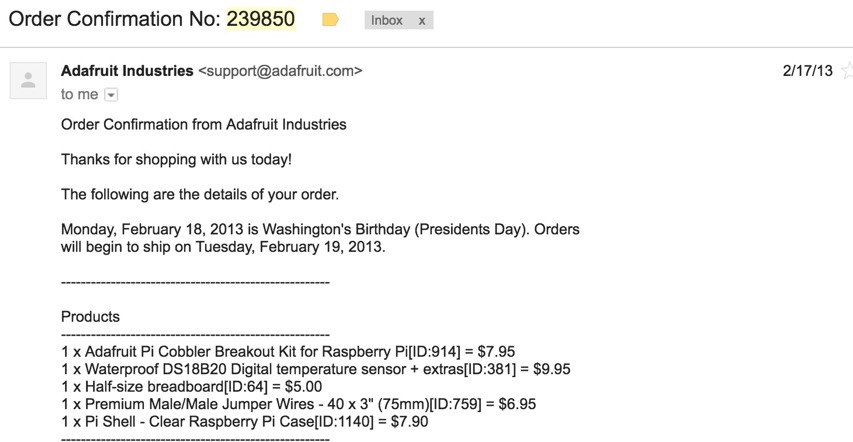 Craig from Chicago Electronic Distributors just hit a great milestone as an Adafruit reseller, here’s what he had to say!

I purchased my first Raspberry Pi in January 2013, and realized that the Pi could be a bit tricky for someone new to Linux. I thought it might be fun to start a business selling configured Raspberry Pi systems for the educational and home entertainment markets, so a month later I incorporated Chicago Electronic Distributors.

Around this time, I learned about this super cool company called Adafruit, and I bought a Pi Cobbler, a DS18B20 temperature sensor, and a case for my Pi. I was soon logging temperature with my Pi, confirming that winter in Chicago was indeed cold.

I was poking around Adafruit’s site one day and saw that they had a reseller program. I applied for the program, and was amazed when I was accepted to help sell Adafruit products! We started out small, ordering around $250 at a time, but by the end of the year we were placing some pretty decent orders.

As we have grown, my favorite part about working with Adafruit has been having their great products in our warehouse. Whenever I want to build something, it is instant gratification because chances are I am stocking any item I need. We love watching Adafruit’s amazing YouTube channel and using the Adafruit Learning System to help steer our ideas. I was even inspired to learn the Python programming language. It turns out that even Mechanical Engineers can write code and build with electronics!

Fast forward to today and we are stocking around 400 Adafruit products and adding more every week. While we still do a lot of work with the Raspberry Pi, we are fully entrenched in the Arduino community and we have a great group of suppliers. I even started a Canadian business called Elmwood Electronics to service customers north of the border.

Hats off to Lady Ada, Phil and the entire Adafruit team. You have built a great company and it has truly been a pleasure working with Adafruit.

PS- attached a screen shot of my first order…we’ve done about 600 between both businesses since them!