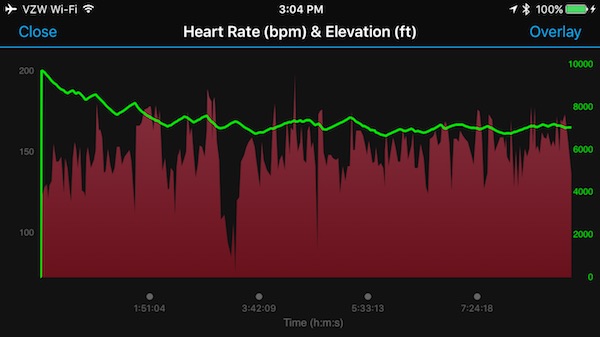 Heart rate data can be an excellent training guide. I wear a heart rate monitor for all my runs and rides normally holding myself to an optimal fat burning pace. I use the uber simple 180 formula (180 – AGE) to determine my ideal fat burning heart rate. My heart rate number is 141 derived from 180 BPM – MYAGE (39 years old). When I stick within +5 BPM of my number I can run for up to eight hours without any significant nutrition and have minimal recovery issues. If I exceed my heart rate number for an extended period recovery will take longer. I will also need to get some calories in me to avoid “hitting the wall“.

Phil Maffetone came up with the 180-formula aka MAF and has an excellent write up explaining it:

A heart-rate monitor is the most important tool for developing optimal endurance and better fat-burning. This simple device is a valuable tool that not only guides your training but is part of an important assessment process, and can even be used in some competitive situations. Unfortunately, most people use their heart-rate monitors only to see how high their heart rate gets during a workout, or evaluate resting heart rate in the morning.

In the 1970s, I first measured heart rates as a student in a biofeedback research project. Through this research, it became evident that using the heart rate to objectively measure body function was simple, accurate and useful, especially for athletes. I began using heart rate to evaluate all exercising patients, and by the early 1980s developed a formula that anyone could use with their heart monitor to help build an aerobic base.

This “180 Formula” enables athletes to find the ideal maximum aerobic heart rate in which to base all aerobic training. When exceeded, this number indicates a rapid transition towards anaerobic work.

A good aerobic base isn’t important only for endurance athletes. The system that controls the body’s stress response is functionally linked to the anaerobic system. In other words, if you depend too much on your anaerobic system, you’ll be more stressed, and therefore more likely to overtrain or become injured. I discuss these topics more in depth in The MAF Test and in The New Aerobic Revolution.

To find your maximum aerobic training heart rate, there are two important steps.

a)  If you have or are recovering from a major illness (heart disease, any operation or hospital stay, etc.) or are on any regular medication, subtract an additional 10.

b)  If you are injured, have regressed in training or competition, get more than two colds or bouts of flu per year, have allergies or asthma, or if you have been inconsistent or are just getting back into training, subtract an additional 5.

c)  If you have been training consistently (at least four times weekly) for up to two years without any of the problems just mentioned, keep the number (180–age) the same

d)  If you have been training for more than two years without any of the problems listed above, and have made progress in competition without injury, add 5.

In this example, 145 must be the highest heart rate for all training. This allows you to most efficiently build an aerobic base. Training above this heart rate rapidly incorporates anaerobic function, exemplified by a shift to burning more sugar and less fat for fuel.

Initially, training at this relatively low rate may be difficult for some athletes. “I just can’t train that slowly!” is a common comment. But after a short time, you will feel better and your pace will quicken at that same heart rate. You will not be stuck training at that relatively slow pace for too long. Still, for many athletes it is difficult to change bad habits.

If it is difficult to decide which of two groups best fits you, choose the group or outcome that results in the lower heart rate. In athletes who are taking medication that may affect their heart rate, wear a pacemaker, or have special circumstances not discussed here, further consultation with a healthcare practitioner or specialist may be necessary, particularly one familiar with the 180 Formula.

The story behind the 180 Formula

The heart rate is a direct reflection of the body’s oxygen need. The relationship between one heartbeat and the next is associated with heart rate variability, which reflects parasympathetic nervous system (PNS) function. This is an important factor that professionals can use to assess heart health, and for athletes to evaluate recovery from training and racing.

The heart has a built-in mechanism of nerves that controls its own rhythm (to maintain a heart rate of around 70 to 80 beats per minute), but the brain, through the action of the autonomic nervous system and various hormones, can compel the heart to produce a wide range of heart rates based on the body’s needs. This rate can be as low as 30 to 40 in those with great aerobic function to as high as 220 or higher in young athletes during all-out efforts.

In the late 70s and early 80s I had in my office several bulky heart monitors, which I used for heart-rate evaluation. Whether the athlete was on a treadmill, on a stationary bike in the clinic, on the track, or at another location, I would record a number of pre- and post-workout features.

Training at various intensities affects both posture and gait: the greater the anaerobic work, the more distorted the body’s mechanics become. These changes are due, in part, to previously existing muscle imbalance and muscle problems that develop during the workout. By correlating this mechanical efficiency with heart rate at various points before, during and after workouts, I found an ideal training heart rate—one which promoted optimal aerobic function without triggering significant anaerobic activity, excess stress, muscle imbalance or other problems.

The heart rate I found to be ideal in my assessment was often significantly lower from the results of the commonly-used 220 Formula. However, it was becoming evident that athletes who used the 220 Formula to calculate their daily training heart rate showed poor gait, increased muscle imbalance, and other problems following a workout. Often, these athletes were overtrained.

It soon became evident that athletes needed more consistent training quality. Each athlete needed to have his or her own heart monitor and train with it every day. With Polar’s entry into the marketplace in 1982 came the advent of modern heart monitors, which sensed the heart rate directly from the chest wall and transmitted the information to a wristwatch. Athletes who wore heart-rate monitors during each workout felt better and improved in performance at a faster rate than others who trained without a monitor.

My new goal was to find a way that any athlete could determine an optimal training heart rate, using some simple formula—ideally one that resulted in a very similar or identical heart rate as my manual assessments.

Over time, I began piecing together a mathematical formula, using as a guide the optimal heart rates in athletes who had previously been assessed. Instead of the 220 Formula—220 minus the chronological age multiplied by some percentage—I used 180 minus a person’s chronological age, which is then adjusted to reflect their physiological age as indicated by fitness and health factors.

By comparing the new 180 Formula with my relatively lengthy process of one-on-one evaluations, it became clear that this new formula worked very well. In other words, my tedious assessment of an individual athlete and the 180 Formula resulted in a number that was the same or very close in most cases.

In the early 1980s, I settled on the final, most effective formula, which is the one in use today: 180 minus a person’s chronological age, which is then adjusted to reflect their physiological age as indicated by fitness and health factors. The use of the number 180 is not significant other than as a means to finding the end heart rate. Plus, 180 minus age itself is not a meaningful number; for example, it is not associated with VO2max, lactate threshold, or other traditional measurements. The end number is an athlete’s maximum aerobic heart rate. Thanks to the 180 Formula, all athletes can now obtain their ideal individual aerobic training rates.

Comments Off on The 180 Formula : Optimal Heart Rate Training