Mars Comes to Miami as an Immersive Interplanetary Experience #ArtTuesday 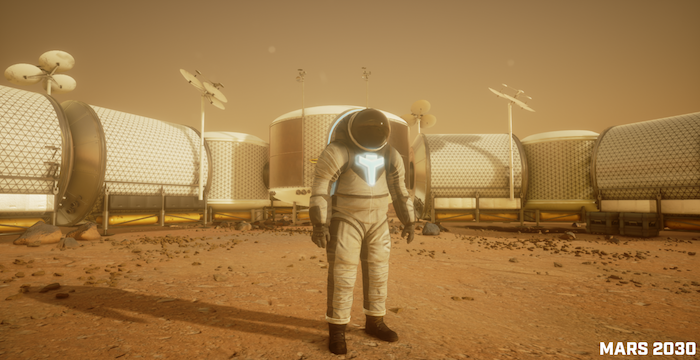 Imagine suiting up like an astronaut, your arms and legs enclosed in soft warmth and your head in a helmet. You’re suddenly in a ship headed for Mars, blasting through space and landing on its burnt sienna surface. Sound doesn’t travel the same way here—your steps along the rough, rocky surface are muted—but your journey is soundtracked by beautiful, symphonic crescendos, traveling with you. You can see and touch peaks, valleys, ice caps. If you get tired of exploring on foot, step into your rover, observing the landscape through the windows. Your body might not have gone to space, but for now, your senses indicate that you’re on the first expedition to the Red Planet.

From October 7th through the 9th, Miami’s III Points Music, Art, & Technology Festival will premiere the debut of Mars 2030, an immersive virtual reality production designed by FUSION. Participants will slip on a spacesuit and helmet and effectively fly to Mars, where they can explore a topographically accurate landscape. Though the experience feels magic (you’re on Mars!) it’s functionally realistic, both a simulation and an adventure. Mars 2030 is filled with details from real missions to Mars, thanks to Fusion’s Space Act Partnership with NASA. This partnership allowed FUSION to explore NASA’s research labs (including their Hybrid Reality Lab) and create an ultimately symbiotic project: as project designer and FUSION Virtual Reality Developer, Julian Reyes, explains, “We gave NASA all of our information so they could convert it and use it as a training simulation for their astronauts.”