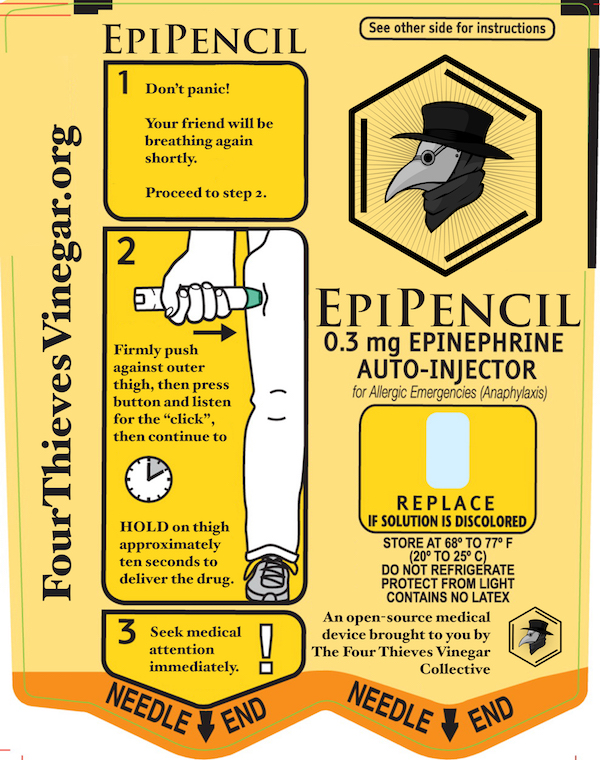 WHEREAS The pharmaceutical industry continues to put profits above human life, and

WHEREAS Autoinjectors and epinephrine are technology which belongs to the world, and

WHEREAS EpiPens save lives every day, but only for those who can afford them, and

WE HAVE developed the EpiPencil, an epinephrine autoinjector which can be built entirely using off-the-shelf parts, for just over $30 US.

Sources for the three items you require are linked below, followed by a video which details how to assemble them.

The EpiPen, a spring-loaded device full epinephrine, of has entered the pantheon of modern pharmaceutical chicanery of late after its maker raised its price to $600 a unit. Now, however, you can make your own EpiPencil for about $30.

The EpiPencil is a project by the Four Thieves Vinegar Collective, a group of pharma hackers who are trying to loosen medicine from its arguably necessary commercial restraints. One of the project’s leaders, Dr. Michael Laufer, created a how-to video describing how to make and load the pencil with epinephrine.

You can find a complete list of parts here.

The concept isn’t without its detractors. Jennifer Miller, a professor of medical ethics at NYU, told Spectrum that “releasing a schematic of a medical device that hasn’t been validated by a regulatory agency is irresponsible” and that a DIY pharmaceutical system without regulation is dangerous.

“If your child is having a life-threatening allergic reaction, you want to make sure they get the right medicine, at the right time, at the right dose,” she said. “An EpiPen will give you what you need, she says, “but you can’t guarantee that with this other device.”

Hacking pharmaceuticals is a very dangerous game. But if we run major electrical and transportation systems on “home-grown” Linux why can’t we experiment with simple tools like the Epipen? Given that it’s basically an injection system that can be easily re-engineered in multiple ways there must be a way to re-engineer it to make it cheaper and easier to acquire. Pharmaceutical companies obviously have dueling missions, first the Hippocratic injunction to do no harm and second the impetus to raise money to further research. While many see Big Pharma as rapacious a greater number have been saved by its products. On the other hand we have philosophy of free knowledge and this is one of the most dramatic examples of that principle. While not many folks will follow Laufer’s instructions to hack the system, it’s nice to know the plans are available and out there and someone is thinking about alternatives.