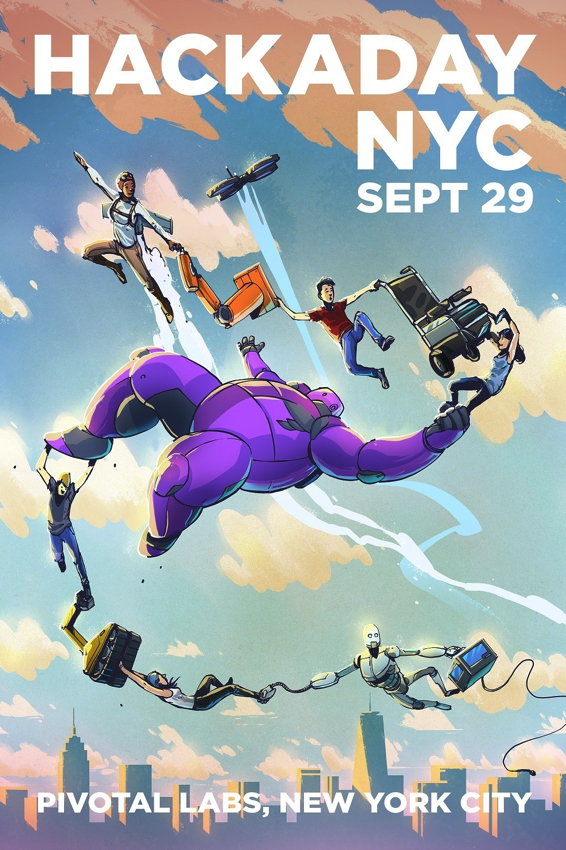 Hackaday is hosting a meet up this Thursday at Pivotal Labs in NYC – if you are in the area and interested in going please RSVP here!

Join us for Hackaday MakeItNYC’s first Meetup of the fall season as we anticipate 2016’s fifth + final Hackaday Prize challenge, “Assistive Technologies” as well as World Maker Faire, coming to the New York Hall of Science on October 1st & 2nd.

We will kick off the evening’s talks with a spotlight on Assistive Technology — currently confirmed speakers include Holly Cohen & John Schimmel of DIYAbility, Johnny Falla of the Enable Community Foundation, and Chad Leaman of the Neil Squire Society.

Next up, Nisan Larea will demo the new WAZER, an affordable desktop waterjet cutter.

Got big plans for Maker Faire? We will dedicate ~45 minutes for an open session of Lightning Talks. Take the mic and share your latest projects & ideas with the community — a sign-up sheet will be available at check-in and time allocations will be determined by the number of participants.

Watch this space for additional details + speakers! Extra special thanks to Pivotal Labs for generously providing our venue for the evening.

Feel free to contact Shayna with any questions or concerns. See you on September 29th!

Holly Cohen is an occupational therapist that specializes in assistive technology. She is the co-founder of DIYAbility and is an adjunct professor at NYU’s School of Steinhardt in the Department of Occupational Therapy. She has lectured nationally at conferences, discussing the benefits of assistive technology for individuals with disabilities. Most recently Holly was a speaker at the 2016 TED conference.

John Schimmel is a tinkerer, programmer and lover of all foods that go with maple syrup. He is the other co-founder of DIYAbility, an adjunct professor of assistive technology at NYU’s ITP and IDM program. John has an interest in making electronics, programming, fabrication tech and STEM accessible for people with disabilities to make their world.

Johnny Falla volunteers as a Director for the Enable Community Foundation as his “5-9,” which 3D prints radically affordable prosthetic devices for people globally. In his “9-5” day job, Johnny serves Director of Development at JUST Capital. Previous to JUST Capital, Johnny’s career has spanned the worlds of digital communications and brand strategy, international development, and venture philanthropy. He served as Engagement Director at Sub Rosa, a New York-based experiential design firm, where he focused primarily on advanced manufacturing projects in Nigeria on behalf of GE. His career started at the Skoll Foundation in California as an Associate Program Officer, working on the Skoll Awards for Social Entrepreneurship for eBay co-Founder Jeff Skoll. He has also led digital marketing for Jeff Sachs’ Millennium Promise, focused on rural village development across sub-Saharan Africa.

Johnny earned his Master in Public Policy from the John F. Kennedy School of Government at Harvard, and holds a BA in International Relations from Stanford University. Johnny is a long-time Brooklyn resident and originally from Portland, Oregon.

Chad Leaman is passionate about bridging communities of knowledge and experimenting with technology for social good. By day, he is the Director of Development for the Neil Squire Society, a Canadian nonprofit organization that uses technology to empower people with physical disabilities. As a volunteer, he co-organizes NetSquared Vancouver, providing free technology workshops for nonprofit organizations, and Chair’s the BC Technology for Learning Society. He’s also a father of young twins and most likely to get injured while playing sports.

About DIYAbility: Empowering people with and without disabilities.

“We believe that people with and without disabilities can be empowered when using the correct technology. More importantly, we want everyone to know they have the right to participate in the design & making of technology – having the opportunity to make your own ‘stuff’ can lead to increased quality of life, maintaining independence, perhaps a new career and staying curious about the world.”

About The Enable Community Foundation: Deploying innovations for people with limb differences.

“The Enable Community Foundation supports an international network of passionate volunteers using 3D printing technology and STEM education to develop and deploy hyper-affordable prosthetic devices to children and other under-served populations around the world in a safe, sustainable manner.

In contrast to traditional prostheses that are expensive and often impractical for growing children, 3D printed prosthetics are innovative and inexpensive. “Superhero hands” developed in partnership with young recipients and their families can turn a potential disability into a life-affirming opportunity for personal growth and innovation, for recipients as well as for makers, world wide.”

About Neil Squire Society and the LipSync: An estimated 1 million people in Canada and US have limited use of their arms—meaning they’re unable to use touchscreen devices that could provide access to helpful apps and services. While solutions exist for desktop computers, they can cost up to $3,000, and are impractical for mobile devices. The Neil Squire Society has created a mouth-controlled solution called the LipSync to support use of mobile devices. The design and components are open sourced, and they are looking to engage makers to create and provide the device to people with disabilities in their own community. We have a new prototype that is made primarily through 3D printing, common off the shelf parts, and is currently in the Hackaday.io AT contest.

“The brainchild of a group of UPenn graduates, WAZER is the first desktop waterjet that cuts any hard or soft material with digital precision. The team was looking for an easy-to-use tool that could make precision cuts in hard materials. Existing desktop digital tools like 3D printers and laser cutters work well for soft materials, but the only affordable method for cutting metal, glass and stone is to use hand operated tools, which is both time consuming and inaccurate.

WAZER is the first waterjet cutter that can fit in every workshop. It cuts through any material and is compact and contained, making it clean, safe and quiet to operate. WAZER’s digital control achieves detail and accuracy impossible by hand, while freeing you up to complete other tasks.”