The MATIA Project Assists The Blind and Those with Memory Loss 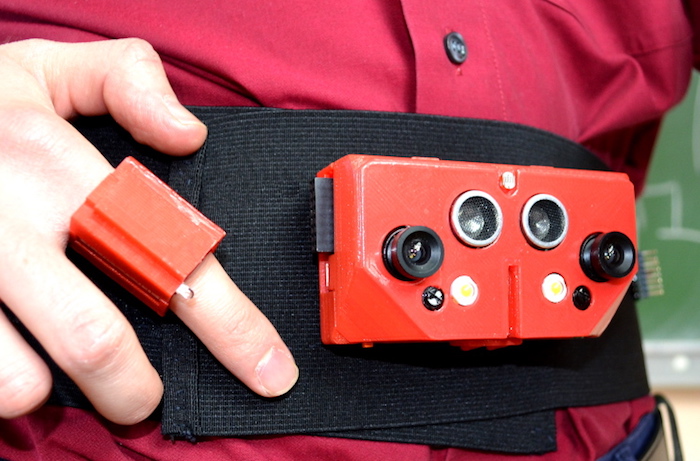 The MATIA project is loaded with sensors to assist the blind and people who suffer from memory loss. It consists of two cameras, two ultrasonic sensors and ten other sensors. MATIA will describe environments with voice and musical sounds while communicating through a smart phone. The device can also identify walking paths, faces and even emotions. The Polish team of Petros Psyllos and Krzysztof Bujnarowski just won the 2016 Microsoft Imagine Cup.

Tell us about your team, what are your strengths?

Our team consists of people with different skills, interests and experience. It creates a synthesis of different ways of looking at the world – from the humanist side and up to technological point of view. Tech skills in combination with soft skills increase the effectiveness of each our project. We are extremely determined and try to improve our work each day. We focus on innovation and mutual development. We are not afraid of failure, because we learn from mistakes. The team consists of: Petros Psyllos, who is responsible for the electronics and tech part of the project and Krzysztof Bujnarowski, dealing with business and marketing. Our supervisor is Dr Jerzy Sienkiewicz (DMedSc).

You’ve created a product that help blind people live a normal life. How it works?

Our project – MATIA – is a multi-sensor device for blind people and people with dementia and Alzheimer’s disease. It’s a small, mobile video module, which can be pinned to the chest, waist or head of a blind person. It comes with two cameras, ultrasonic sensors and 10 other sensors, which send data to your smartphone. The device describes the environment surrounding to a blind person, inform about the size, distance and characteristics of the obstacles. Used deep neural networks accurately describe all objects ahead using audio description. The device can also describe objects with the help of the music, specific items have its own individual sounds (sidewalk sounds are different from a standing trash bin). MATIA device can also identify people’s faces and their emotions. In case of emergency, the device will automatically contact emergency services, and in case of battery discharge of the phone, the device activates emergency mode, which guarantees a safe home arrival for its user. In addition to all these functions, there are other, replacing the mass of separate entities used so far by the blind people. These include: text reading, unusual situations warnings, describing the products in the store, identifying the color of the traffic lights, measuring distances and paces, banknotes identification, and many others. An important part of the MATIA project is a Virtual Desktop Control, enabling full service of the users mobile phone, which is paired with the device. User controls it’s mobile device with the help of gestures.

What inspired you to create MATIA?

We’ve got inspiration while talking to blind people we met thanks to Audiodeskrypcja Foundation, organization dedicated to audio description creation for the blind people. We decided to use the knowledge gained at our Technical University to create something useful, which can help blind people.

What’s your plans for the future? When do you plan to start selling your product?

Research and development of our project will eventually be completed in October 2016, following by testing the equipment by 30 blind testers. The expected date of sales launch is November 2017. Sales will be conducted through the foundation for blind people, which supports us and our project. We also plan to run a Kickstarter campaign in order to get the financial support we need to increase the production of our device.

How Imagine Cup help you in product development? Was it worth to take part in the competition?

The most important value of the competition was that we were able to present ourselves in front of business people and investors. The project gained high interest among them. We believe that contacts, strong support and financial resources we received from Microsoft will help us  polish our prototype and implement our business strategy. Also, during our visit to Microsoft headquarters in Redmond, we met representatives of Microsoft Research Engineering Team that showed us laboratories, where they develop devices dedicated to people with various disabilities. Besides they pledged financial support for our project and even offered a position in Microsoft.

We wish you luck, guys, and looking forward to hearing from you soon!

Watch the drama unfold as young developers from around the world compete to win Microsoft’s student technology competition. The title of World Champion and a mentoring session with Microsoft CEO, Satya Nadella is on the line.