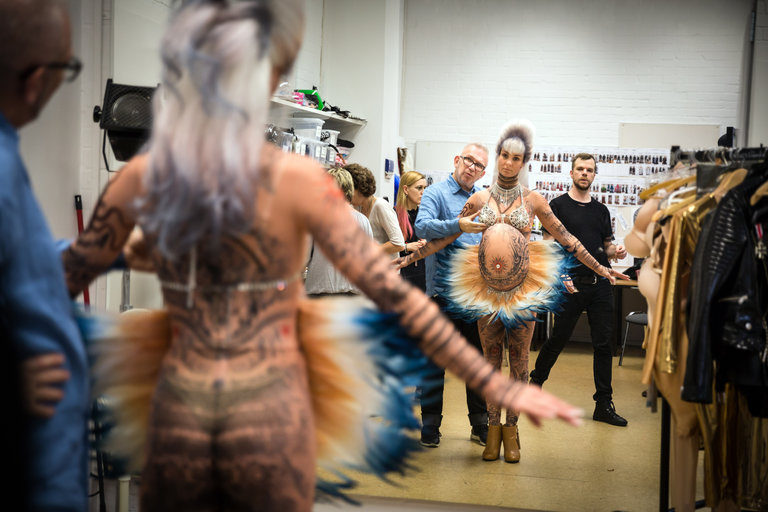 BERLIN — “Who is in charge of the feathers?” the designer Jean Paul Gaultier shouted on a July day as about 20 people scurried around him in the costume workshop at the Friedrichstadt-Palast theater.

Mr. Gaultier stood behind a dancer wearing a bodysuit of fake tattoos under a rhinestone-encrusted bikini, from which bulged a prosthetic pregnant belly ringed in multicolored feathers.

Once the feather issue had been resolved (with flesh-colored tulle), another dancer entered, wearing nothing but black stilettos and a skin suit padded to give her a Kardashianesque physique. She wore a prosthetic head with long shiny black hair and a stunned, expressionless face resembling that of an inflatable doll or a casualty of excessive Botox. Gripping the sides of her thighs, the dancer stretched the “skin” outward like the webbed wings of a bat. Mr. Gaultier looked pleased.

The outfits were among more than 500 costumes that Mr. Gaultier has designed for “The One,” a Las Vegas-style revue featuring song, dance, special effects and acrobatics that opens on Oct. 6 (previews start on Thursday) at the 97-year-old theater in the Mitte district.

Since introducing his first collection in 1976, Mr. Gaultier, now 64, has become one of the most influential and celebrated figures in the world of fashion, all the while pushing its boundaries. He has designed for film, stage, runway and retail; hosted a hit television show; released a dance album; introduced best-selling fragrances; and helped shape the visual identities of numerous pop stars — most notably Madonna, for whom he designed the cone bra and corsets she and her dancers wore on her “Blond Ambition” tour in 1990.

But Mr. Gaultier said he had always dreamed of designing for a revue ever since watching a broadcast of a show at the Folies Bergère on his grandmother’s television as a small boy.