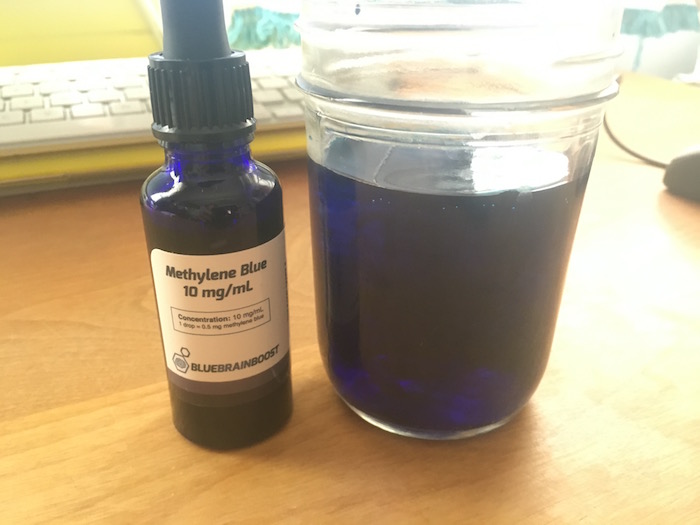 Do you know which nootropic looks like Romulan Ale and was first synthesized in the late 1800’s? Why,  it is methylene blue of course. This obscure old timer of a smart drug was originally synthesized as a dye and eventually injected directly into animals. German Nobel laureate Paul Ehrlich coined the phrase “magic bullet” as this substance was used to stain and then identify nerve fibers. MB was used for Malaria treatment as early 1891 and is currently being revisited for that purpose and many more medical applications. Today biohackers are experimenting with MB for mood, memory and energy improvements. 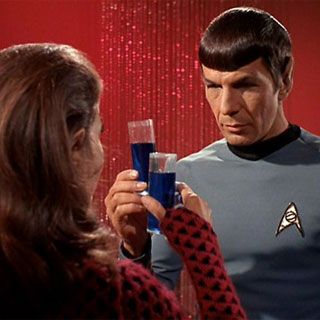 The Smart Drugs Smart Podcast has a forty minute episode that summarizes Methylene Blue. Dr. Francisco Gonzales-Lima is interviewed in this episode and explains the history, applications and his on-going research.

My own experience with Methylene Blue is similar to the Nootropix review below. It feels as if it helps with mood, memory and energy. Dosage is recommended at .5mg per kg of body weight being the low end, but I find doses as little as 2mg in total to be noticeable. This is definitely one to avoid if you are on a SSRI. Please make sure to only purchase high purity as the inexpensive dye versions will contain toxic heavy metals. Do not exceed recommended dosages.

How does Methylene Blue work?

Mitochondria are organelles within cells that play the key role of energy production. Cellular energy is stored in the form of adenosine triphosphate (ATP), one of the most important molecules in the cell. As the name suggests, ATP contains three linked phosphate groups. Removal of each group releases a large amount of energy, which is expended in supporting cellular function. Subsequent removal of ATP produces ADP (adenosine diphosphate) & AMP (adenosine monophosphate). ATP is produced within mitochondria as a final product ofrespiration, a series of biochemical reactions that extract energy from glucose. These biochemical reactions require oxygen & electron carriers (e.g. NADH).

Methylene blue supports mitochondrial respiration by functioning as an additional electron carrier[5]. MB receives electrons from NADH through mitochondrial complex I, itself being reduced to leuco-MB (MBH2). Leuco-MB then donates the electrons to cytochrome C, upon which it is recycled back to MB. These reactions serve to create a high proton (H+) concentration in the space between the inner & outer mitochondrial membranes. This leads to the passage of H+ down the concentration gradient, through mitochondrial complex V. In doing so, ADP & a phosphate (Pi) are joined to form ATP. Leuco-MB can also act as a free radical scavenger, neutralising superoxides by accepting electrons & itself becoming oxidized back to MB[6]. In this way, leuco-MB acts to prevent direct oxidative damage caused by free radicals.

The pharmacologic mechanism behind the neuroprotective activity of methylene blue is unique in that it does not involve a receptor-ligand interaction, as do most drugs. In addition, MB also exhibits an atypical dose-response curve– one that has been described ashormetic[8]. Hormesis is a phenomenon where lower doses produce optimum responses while higher doses or exposures may actually produce the opposite effect. Hormesis is an intriguing pattern that may explain the dose-responses associated with exercise & oxidative stress, where the right amount of exercise-induced oxidative stress induces a cascade of favourable physiologic adaptations that can mitigate more severe stressors[9].

As previously mentioned, metabolism of MB involves reduction to leukomethylene blue (MBH2). MB is primarily eliminated in the urine (75%)[11].

I have tested BlueBrainBoost’s formulation with the following results. I have noticedincreased energy and decreased fatigue, with an onset of up to 1 hour and duration of 2-4 hours. The only adverse effects were discolouration of the mouth and urine. I used a dosage of 10 mg (20 drops) in the morning sublingually before brushing my teeth. During this time, I was also taking 30 mg/day coluracetam, 500 mg/day ashwagandha, & 600 mg/day NAC. I suspect that coadministration of CoQ10 and creatine may have a synergistic effect based on the pharmacologic site and mechanism of action.

Related
The Science of the Psychoactive Drugs Act

Methylene blue is associated with a very favourable safety profile. It is generally well-tolerated at doses lower than 2 mg/kg.[12] The most noticeable side effect of MB is blue discolouration of the oral cavity and blue or blue-green discoloration of the urine. These effects are reversible and not harmful. [13] Staining of the teeth can be removed with repeated tooth-brushing, and discolouration of the urine ceases after the drug is fully removed from the system. Other reported adverse effects include a mild headache and dizziness[14].

MB does exhibit some serotonergic activity. This is due to its inhibition of enzymatic degradation of serotonin by MAO-A. Intravenous doses higher than 5 mg/kg have led to the development of serotonin syndrome. This risk is increased in individuals already taking other serotonergic agents (e.g. tianeptine, St. John’s Wort, common antidepressants, dextromethorphan, tramadol). For these reasons, individuals at risk should avoid coadministration of MB with serotonergic agents by at least 2 weeks (or more depending upon the agent), start at low doses, & increase carefully to an effective dose.

Neurotoxicity has been associated with some preparations of MB as a result of chemical impurities. The presence of heavy metals used in the synthesis of MB can have adverse effects on neurones. Thus, only pharmaceutical grade formulations are recommended for human consumption – not lab grade, & not aquarium grade. These formulations may not meet USP standards and may contain up to 11% contaminants.

How should I take it?

Because MB’s role as a neuroprotective agent in humans is still being studied, there is as yet no recommended dosage. The animal doses used in preclinical trials roughly converts to a human equivalent dose of 0.16–0.64 mg/kg administered sublingually. Sublingual administration may produce higher bioavailability than oral administration, but causes more staining of the mouth. I calculated my dose like so:

It should be noted that due to the hormetic dose-response curve, the response to MB may decrease with higher doses. MB is typically formulated as a 10 mg/mL solution, where 1 drop = 0.05 mL = 0.5 mg. The bottle should be shaken well before administration.

Overall, I would recommend methylene blue to individuals looking for an inexpensive extra boost in energy. I have not tested MB long enough to notice changes in cognition or memory, but the pre-clinical studies & pharmacologic literature seem to support this benefit.