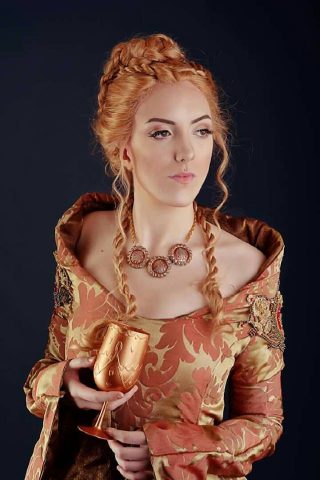 When I saw Amazonian Cosplay’s, a.k.a. Beth, Cersei Lannister cosplay for the first time, I stopped and did a double take. She positively captured the elegance of the character and crafted an appropriately decadent costume with killer embroidery. That led me to the rest of her costuming portfolio, and it’s equally impressive. I talked with her about the Cersei costume, which cosplay materials she likes most, her cosplay wish list, and more.

Adafruit: What inspired you to start cosplaying and what was the first costume you made?

Amazonian Cosplay: I got into cosplay through the Doctor Who community! I’m not sure if it is still running but there was a LiveJournal for Doctor Who Cosplayers and I was inspired to make my first costume to wear to a local convention through that. My first costume was Amy Pond from the episode The Girl Who Waited in 2011. 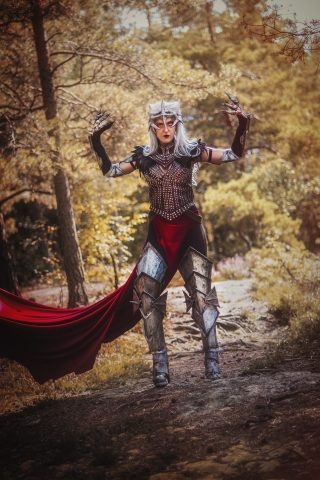 Adafruit: Since that first cosplay, what do you think has been the most valuable/helpful skill you’ve learned?

Amazonian Cosplay: This is a tricky one as since starting cosplaying I have learned pretty much every skill I now have from scratch! For the costumes I tend to make, learning to work properly with Worbla and foam has been the most valuable, as so many different things can be done with it. I’m still working on getting my sewing skills decent haha!

Adafruit: Your cosplay portfolio includes a variety of characters from Brienne to Psycho. What goes into determining who you’ll cosplay next?

Amazonian Cosplay: It varies between costumes! Some, like my Flemeth cosplay from Dragon Age (which I am currently working on and will be finished by the time this is published!) I have been planning to make for the past few years. Other costumes, like my Aloy from Horizon Zero Dawn, I saw the trailer and immediately fell in love and decided to cosplay her. Others, like my Cersei, I wouldn’t have necessarily made if I wasn’t going to be wearing it in a group. However I keep a spreadsheet of all my future costumes and conventions to try and stay organized! 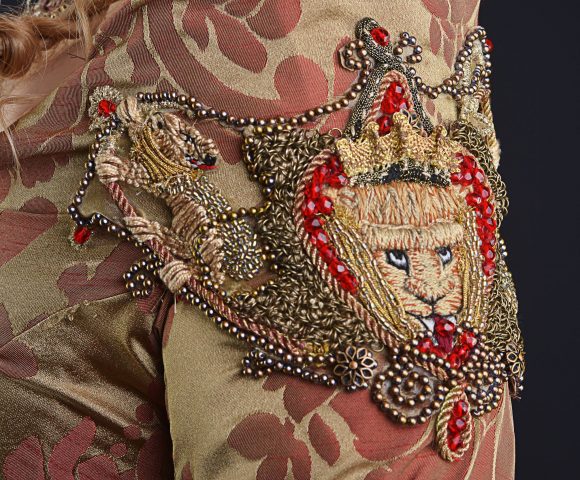 Adafruit: The embroidery on your Cersei Lannister costume is stunning and so detailed. Can you talk about your work on the costume, how you accomplished the embroidery, and any challenges you faced during construction?

Amazonian Cosplay: Thank you so much! I started making the costume in November 2015, with the aim to wear it to compete at London Super Comic Con 2016 with my friend Helen Alice Cosplay making Margaery Tyrell’s wedding dress. She very kindly designed and constructed the corset that is inside the dress for me, as she is absolutely fabulous with corsetry and sewing and I’m pretty clueless! I am incredibly proud of the embroidery on the costume, as it has over 100 hours of work! Not including all the hours it took to research and source all the beads for it. But as Michele Carragher (the Game of Thrones embroiderer) is basically a goddess so I wanted to do her work justice. The main challenge was getting the costume finished in time for the convention. While almost 4 months should be easily enough time to have completed this costume, I had more than one hiccups in my life that threw a bit of a spanner in the works! The wig styling was also a challenge, as I have always struggled with hair styling. But in the end it turned out okay, even if I was very stressed!

Adafruit: What is a material you can’t live without and how have you used it in your costumes?

Amazonian Cosplay: Ooh this is a hard one! My costumes vary in what materials are used so much that it’s hard to pick one!

For my sewing/embroidery based costume, it has to be the types of needles. Chenille needles are my absolute favourite as the eyes are so big so its incredibly easy to fit the embroidery floss through, and proper beading needles are a godsend as well (even if you stab yourself a lot!)

For armour based costumes I would say painting with spray car paint. It is the best way I have found to get a realistic metal shine when used on top of grey primer. For silver, like on my Flemeth, I used Nissan Blade Silver, and for gold, like with my Brienne, I use Nissan again. 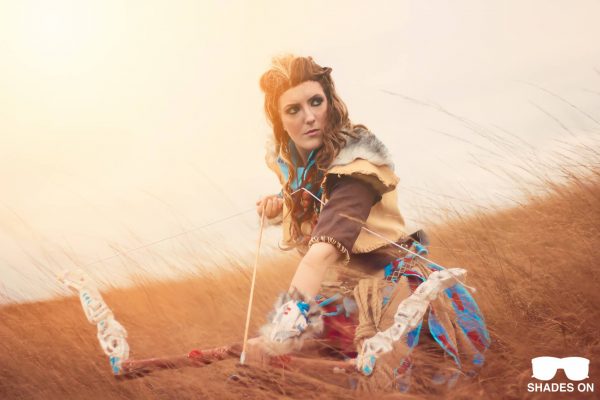 Adafruit: Which costumes are on your wish list to make?

Amazonian Cosplay: There are a couple that I really want to make but just haven’t got around to! The first that comes to mind is Lamia from the movie Stardust. I would also really love to make Rumplestiltskin from Once Upon a Time, but I think my number one dream cosplay is Captain Jack Sparrow from Pirates of the Caribbean, however I don’t think I will ever make him unless I qualify for a large competition, because of the amount of time and money it would take me to make. One of my dream cosplays has always been Ravenna from Snow White and the Huntsman however, and she is the next costume I am making after the ones I am currently working on!

Comments Off on Cosplay Interview with Amazonian Cosplay