As part of our ongoing coverage of National Hispanic Heritage Month, today we are celebrating Mónica Ponce de León, architect, Dean of the School of Architecture at Princeton University, and National Design Award winner. 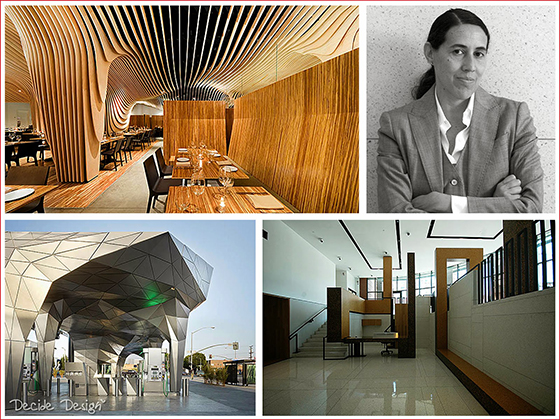 Prior to her appointment at Michigan, Ponce de León was Professor of Architecture, director of the digital lab, and acting architecture program director at Harvard. At Harvard she developed the first robotic fabrication lab in an architecture school in the United States. During her tenure at Harvard, she also held visiting positions at the Southern California Institute of Architecture and the Georgia Institute of Technology, and has given over 60 lectures and symposia on her work, which has been published in over 200 publications worldwide. Alongside Tehrani, Ms. Ponce de León received both the Young Architects Award in 1997 and the Emerging Voices Award in 2003 from the Architectural League of New York. In 2002, she received an Academy Award in Architecture from the American Academy of Arts and Letters  and in 2008 she was named a United States Artist fellow. In 2007 Ponce de León received the Cooper-Hewitt National Design Award in Architecture, the first Hispanic architect to receive this honor.

Her work has received numerous awards, including 13 Progressive Architecture awards, the Harleston Parker Medal (2002), as well as citations from the American Institute of Architects, I.D. Magazine, and the Boston Society of Architects. In 2008, the Macallen Building was named one of the Top Ten Green Projects by the American Institute of Architects Committee on the Environment. After the disbanding of Office dA in 2010, Monica Ponce de León established her own practice, MPdL Studio with offices in New York, Boston and Ann Arbor.

Fabricating Coincidences was an installation in the Museum of Modern Art that serves as an early example of the potential of digital fabrication in architecture. In his review of the exhibition for the New York Times, Herbert Mushamp writes: “‘Congratulations. Grade: A. Humpty Dumpty has a very graceful fall. Propped against the brick wall that encloses the garden along its northern edge, the piece is made of perforated steel plate that has been folded, origami style, into a canopy of cascading metal. The project looks like a staircase, but climbing is not recommended. About halfway up, the horizontal folds start sloping precariously upwards. The piece does nifty visual tricks. Depending on the light, the metal plate can switch from opaque to a semi-transparent scrim. Viewed from straight ahead, the folds collapse into a single plane; as you move around, the forms expand into space, like an escalator for the eye. This may not be masterpiece material, but it’s an inventive appetizer. These are architects to watch.”