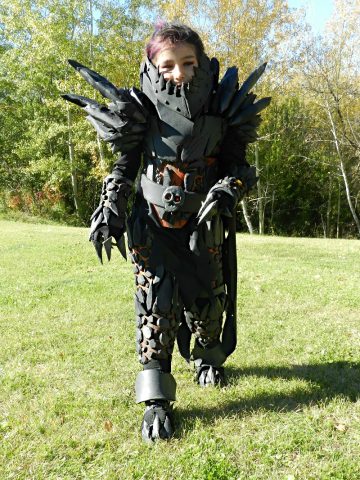 Redditor Scumbag_Sherman’s daugther is a serious destroyer, as in Deathwing the Destroyer from World of Warcraft. Seven year old Videlle originally wanted to be Jinx from League of Legends, but after she saw Jessica Nigri’s Deathwing tutorial, she decided she’d rather be that character. Her ensemble was ready for the recent Edmonton Expo in just a few weeks. The armor was painted with a gun metal/black color, and they applied the paint carefully to make it appear like iron speckles. The rivet accents were made from googly eyes.

You can see more pics of the finished costume at Imgur.

Comments Off on The Littlest World of Warcraft Deathwing Cosplay