Continuing our celebration of National Hispanic Heritage Month today we shine the light on 1980 Nobel Prize in Physiology or Medicine recipient and immunologist Baruj Benacerraf. Benacerraf also holds a National Medal of Science and is a Fellow for the American Academy of Arts and Sciences, among other notable achievements. 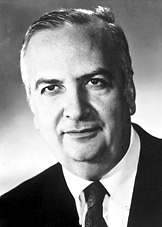 I was born in Caracas, Venezuela, on October 29, 1920 of Spanish-Jewish ancestry. My father, a self-made business man, was a textile merchant and importer. He was born in Spanish Morocco, whereas my mother was born and raised in French Algeria and brought up in the French culture. When I was five years old, my family moved to Paris where we resided until 1939. My primary and secondary education was in French which had a lasting influence on my life. The second World War caused our return to Venezuela, where my father continued to have a thriving business. It was decided that I should pursue my education in the United States, and we moved to New York in 1940. I registered at Columbia University in the School of General Studies, and graduated with a Bachelor of Science Degree in 1942, having also completed the pre-medical requisites for admission to Medical School. By that time, I had elected to study biology and medicine, instead of going into the family business, as my father would have wanted. I did not realize, however, that admission to Medical School was a formidable undertaking for someone with my ethnic and foreign background in the United States of 1942. In spite of an excellent academic record at Columbia, I was refused admission by the numerous medical schools I applied to and would have found it impossible to study medicine except for the kindness and support of George W. Bakeman, father of a close friend, who was then Assistant to the President of the Medical College of Virginia in Richmond.