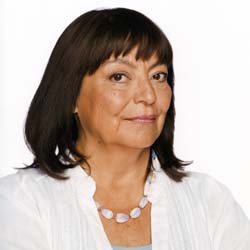 Lydia Villa-Komarrof’s decision to pursue a career in science was decidedly unconventional for Mexican American upbringing in Santa Fe, New Mexico. “Traditionally, Hispanic women are not socialized to believe they can earn a living, much less be scientists,” she has said. But her parents encouraged her to follow her dreams, and by age nine, she knew her future was as a scientist. In 1965, she enrolled in college as a chemistry major, but after an advisor told Villa-Komaroff that women did not belong in chemistry, she switched majors, settling on biology. After college, she was accepted at the Massachusetts Institute of Technology, and became the third Mexican-American woman to earn a science Ph.D. in the U.S.

During her 20-year research career, she has held positions at MIT, Harvard University, University of Massachusetts Medical School, Harvard Medical School, Cold Spring Harbor Laboratories, and Children’s Hospital in Boston. Her most memorable discovery came in 1978, when she was the lead author of a landmark paper demonstrating how bacterial cells could be used to generate insulin. The work was a major scientific innovation in DNA technology and protein synthesis, and she was awarded with two patents.