Some Evidence of an Ocean inside of Pluto #NewHorizons 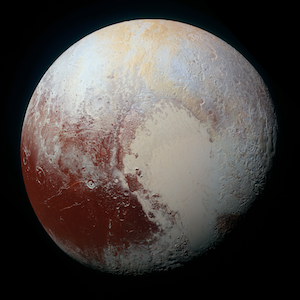 The data gathered from NASA’s New Horizons space probe could indicate a large internal ocean inside of Pluto. Interesting read, Via Scientific American

One of the most visually arresting aspects of Pluto – first seen during the New Horizons flyby in 2015 – is the large ‘heart-shaped’ feature known informally as Sputnik Planum.

This reflective plain of frozen material spans roughly 1,000 by 800 kilometers and sits on Pluto’s northern hemisphere, extending from about 45 degrees latitude down to the equator. Its composition includes large amounts of frozen nitrogen, plus some frozen carbon monoxide and methane. Its texture is varied, but has areas where it appears that material has been convected upwards – welling up into remarkable polygonal features.

A working hypothesis for the origins of Sputnik Planum is that a past impact by another object carved out a crater that subsequently filled in with fresh material (possibly acting as a cold trap for evaporated gases) – helping to explain the relatively smooth and geologically young surface of the plain.

A new study by Johnson et al., published in the Geophysical Research Letters supports this hypothesis, but also suggests that the observed properties of Sputnik Planum require the presence of a deep ocean of liquid water inside Pluto – a watery layer some 100 kilometers thick.

The authors simulate the formation of Sputnik Planum by a giant impact. Smashing a hefty object into Pluto, the computer model first produces a 250 kilometer deep bowl-like crater, with a central ‘uplift’ of material reaching to a similar distance above the surface.
As this ultra-violent event unfolds the researchers looked for ways to match a proposed ‘positive mass anomaly’ (or gravity anomaly) for the Sputnik Planum region. In other words, this region may have more mass in it than an average equivalent area of Pluto’s outer shell. That mass anomaly would help explain why Sputnik Planum is aligned with Pluto’s tidal axis – due to gravitational interaction with its companion Charon.

An answer could be that dense liquid water welled up after the impact, replacing the mass of the Sputnik Planum crater, which later filled in with frozen nitrogen allowing it to gain that important positive mass anomaly. And to maintain this the liquid water ocean must still be there.

The best bet is an internal ocean layer about 100 kilometers thick, and with a roughly 30 percent salinity – that’s about the saltiness of Earth’s Dead Sea. To be that salty the internal water must have interacted with Pluto’s rock core – a similar scenario to those invoked for the salty water inside Enceladus and Europa.