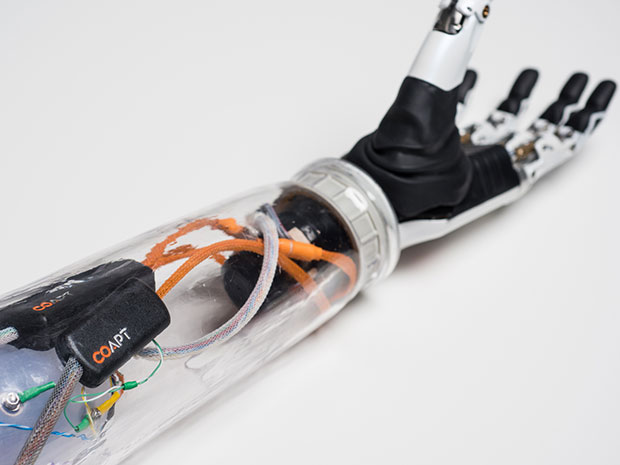 Jodie O’Connell-Ponkos used a prosthetic arm for five years, until the day she threw it across the room in frustration. “Hate was an understatement,” recalls O’Connell-Ponkos, who lost part of her right arm in an industrial meat grinder at the age of 16 in 1985. She didn’t use another prosthesis for 20 years.

O’Connell-Ponkos’ story is common among upper-limb amputees: Despite advances in engineering and availability, the rate of users abandoning upper-limb prosthetics hadn’t changed in 25 years as of 2007, with up to 75% of users rejecting electric prosthetics.

One of the reasons may be that despite better materials, more powerful motors and additional joints, upper-limb prostheses still relied on controls developed in the 1950s. These used either body-powered maneuvers involving clunky cables and harnesses or myoelectric systems, which use electronic sensors resting on the skin of the amputation site to detect muscle activity and translate that activity into motion. The clenching of a bicep, for example, might bend an artificial elbow. It wasn’t intuitive, and often required extensive practice.

Then, last year, O’Connell-Ponkos tried a prosthetic arm enhanced with an new control system that can recognize subtle nerve signals, built by Chicago-based engineering company Coapt. Unlike the prosthesis she used as a teenager, the new arm allowed her to move more naturally, even gracefully. Today, the outgoing horse trainer wears the prosthesis constantly, relying on it for everything from chopping wood to putting her hair in a ponytail.

This recent advance to a natural, intuitive control system for upper-limb prosthetics is notable, if largely overlooked. At this year’s American Orthotic and Prosthetic Association conference in Boston, I had to search for Coapt’s small booth, tucked away in the exhibit hall behind rows of splashy orthotics and leg prosthetics. There, O’Connell-Ponkos, now a paid spokesperson for Coapt, was promoting the technology, which is compatible with the five major prosthetic manufacturers.

Coapt hit the market in late 2013, and an estimated 200 individuals today use the system, says company co-founder and CEO Blair Lock. The system, encased in a small black box, consists of a circuit board and set of algorithms that use pattern recognition to decode electric signals from arm muscles, working as a bridge between the user’s thoughts and the prosthesis.

Comments Off on Bionic Arms Get a Thought-Control Upgrade #WearableWednesday