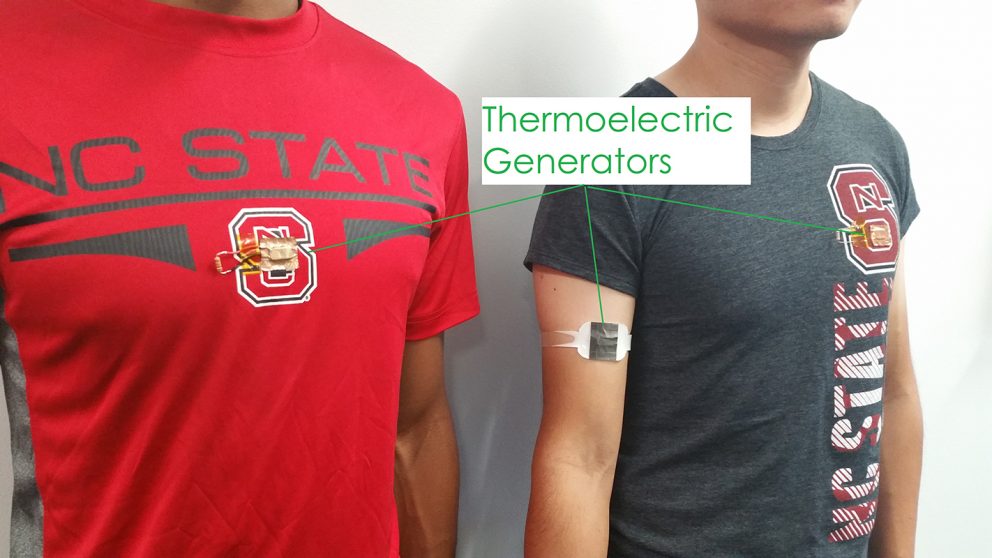 A lightweight device developed by researchers at North Carolina State University (NCSU) that turns body heat into electricity is the latest potential alternative to batteries for wearable technology.

The device, a wearable thermoelectric generator (TEG) that makes use of the temperature differential between a person’s body and the ambient air to generate electricity, is the work of researchers at the Advanced Self-power Systems of Integrated System Technology (ASSIST) center, which is funded by the National Science Foundation and led by NCSU, said Daryoosh Vashaee, an associate professor of electrical and computer engineering at NC State and one of the researchers on the project.

“Current wearables have battery life time of several days to several months depending on their functionality,” he said. “In this project, we developed efficient wearable thermoelectric generators that convert body heat to electricity for turning on the electronic sensors [of wearable tech].”

Researchers at ASSIST focus on a number of projects to develop low-power wearable sensors, such as ECG sensors for heart monitoring, glucose sensors, and ozone sensors to prevent asthma attacks. The new device is aimed at providing a power source for them that precludes the need for batteries, Vashaee said.

The new TEG design is based on the thermoelectric effect, using material that generates voltage once there is a temperature gradient across the material, such as when one side is hot and one is side cold, he explained.

“We synthesized thermoelectric materials that are most efficient for operation with body temperature,” he said. “In the next step, we fabricated wearable generators out of these materials that can generate useful power just from body heat. The generator is a three-layer structure consisting of the thermoelectric legs and flexible thermal spreaders on both sides.”

The prototype TEG is one centimeter squared, but it can scale up depending on the power needs of a device, Vashaee said.