How Gecko Feet Got Sticky #Biohacking 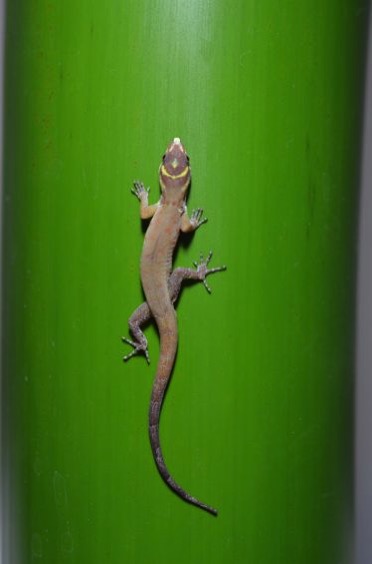 How do key innovations in the animal kingdom arise? To explore this question, gecko expert Timothy Higham, an associate professor of biology at the University of California, Riverside, led a team of evolutionary biologists to study Gonatodes, a genus of dwarf geckos. In the process, the researchers found a gecko, Gonatodes humeralis, that they posit offers a “snapshot” into the evolution of adhesion in geckos.

“The gecko adhesive apparatus, one of the most spectacular innovations displayed by vertebrates, has been intensively studied for the last 16 years and is of considerable interest to nanotechnologists and biomimeticists,” Higham said. “But almost nothing is known about the origin of this adhesive capability. G. humeralis, found in South America, shows how the adhesive capabilities of geckos may have come about. Our integrative analysis of this gecko shows that unexpectedly it has microscopic hairs, called setae, underneath its toes, which allow it to do something dramatically different than all other geckos in the Gonatodes genus: cling to smooth surfaces such as leaves. It does this without all of the complex structure of the toes that typify the geckos that we are more familiar with. In the lab, this gecko can climb smooth vertical surfaces using its incipient adhesive system.”

Higham explained that the setae interact with surfaces through attractive van der Waals forces. The relatively simple expression of setae on the digits of G. humeralis thus provide an enormous advantage in sectors of the habitat typified by smooth, low-friction, inclined surfaces, such as leaves and slippery stems, allowing G. humeralis to avoid predators by occupying habitat that other members of the genus cannot. While it can securely attach to vertical bamboo shoots, for example, other species in the Gonatodes genus generally scale rough tree trunks, rocks, fallen palm trees and move on the ground – areas where their predators abound.

“The relatively simple adhesive system of the G. humeralis is indicative that slight modifications in form can dramatically influence functional outcomes and the ecological niches that can be exploited,” Higham said. “This ostensibly padless gecko offers us a snapshot – a crucial intermediate stage – of the evolution of the adhesion apparatus. It’s telling us, ‘Look, this is how pad-bearing geckos started to acquire adhesion.’”
Further, the findings indicate that the origin of adhesion in geckos was gradual and led to major shifts in ecology and function. They suggest, too, that subtle morphological changes are able to trigger rapid evolution.

Comments Off on How Gecko Feet Got Sticky #Biohacking