Off the rugged coast of the Scottish Highlands, between the mainland and the majestic isles of Orkney, is a stretch of water that’s known for its intense tides. Now the country is making use of them, as the area is about to become home to the world’s first large-scale tidal energy farm.

The first of what will eventually become 269 turbines is currently being transported to the area, known as the Pentland Firth, for installation, reports the Guardian. Each turbine is a weighty piece of mechanical engineering, measuring 15 meters tall and weighing 200 metric tons, with eight-meter-long blades. Initially four turbines will be installed at the site, with the rest being added incrementally between now and the early 2020s to create something that will resemble a submerged version of a wind farm. 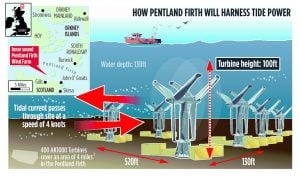