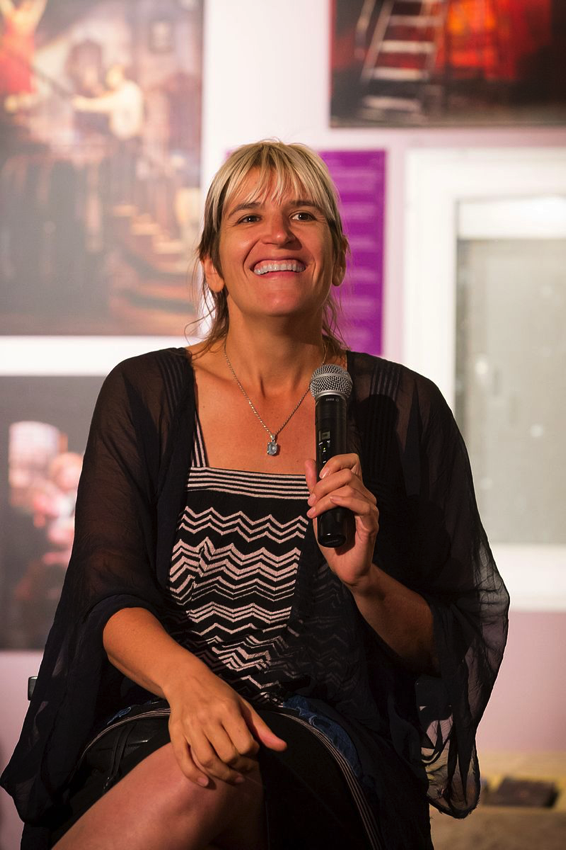 Andrea Polli is an interactive and digital media artist as well as an Associate Professor of Art and Ecology at the University of New Mexico and much more. From her artist’s bio:

Andrea Polli is an artist working at the intersection of art, science and technology whose practice includes media installation, public interventions, curating and directing art and community projects and writing. She has been creating media and technology artworks related to environmental science issues since 1999, when she first began collaborating with atmospheric scientists on sound and data sonification projects. Among other organizations, she has worked with the NASA/Goddard Institute Climate Research Group in New York City, the National Center for Atmospheric Research and AirNow. She holds a doctorate in practice-led research from the University of Plymouth in the UK. Her latest book is Far Field: Digital Culture, Climate Change and the Poles on Intellect Press.

In her research and practice, she experiments with performance, interactive and web art, digital broadcasting and mobile media. She is focused on participatory media, and her practice often includes workshops or other activities designed to engage the public with ideas and concepts at various levels. She believes in the importance of many levels of interdisciplinary collaboration and has created collaborative situations for very large groups, small teams, or pairs of individuals. Through her work as a resident at Eyebeam Center for Art and Technology in New York and in creating the Open Source Learning Community at UNM, she has become increasingly committed to open source practice and concepts to aid collaboration, in project development and in teaching and mentoring.

Polli’s work with art/science, technology has been presented widely in over one hundred presentations, exhibitions and performances internationally including the Whitney Museum of American Art Artport and The Field Museum of Natural History, and has been recognized by numerous grants, residencies and awards including Fullbright and UNESCO. Her work has been reviewed by the Los Angeles Times, Art in America, Art News, NY Arts and others. She has published several audio CDs, DVDs two book chapters and many papers with MIT Press, Cambridge University Press and others.

She currently works in collaboration with atmospheric scientists to develop systems for understanding storm and climate through sound (called sonification). Recent projects include: a spatialized sonification of highly detailed models of storms that devastated the New York area; a series of sonifications of climate in Central Park; and a real-time multi-channel sonification and visualization of weather in the Arctic. In 2007/2008 she spent seven weeks in Antarctica on a National Science Foundation funded project. http://www.90degreessouth.org

As a member of the steering committee for New York 2050, a wide-reaching project envisioning the future of the New York City region, she worked with city planners, environmental scientists, historians and other experts to look at the impact of climate on the future of human life both locally and globally.

She has received a Master of Fine Arts in Time Arts from the School of the Art Institute of Chicago and a PhD in Computing, Communications and Electronics from the University of Plymouth, UK. In 2000, she was voted Teacher of the Year at Columbia College in Chicago in recognition of her work connecting students to the wider community through collaborative projects. These projects included performances and exhibitions at the Chicago Museum of Contemporary Art and a large scale public art project connecting 5 neighborhood arts organizations with live web streaming, an exhibition at the Chicago Cultural Center and six billboards. Pause. was featured as the Millennium Community Artwork for Illinois and funded by The Mid Atlantic Arts Council and Ameritech.

Polli is currently Professor of Art & Ecology with appointments in the College of Fine Arts and School of Engineering at the University of New Mexico. She holds the Mesa Del Sol Endowed Chair of Digital Media and directs the Social Media Workgroup, a lab at the University’s Center for Advanced Research Computing.

She served as the founding Director of the Interdisciplinary Film and Digital Media Program and as Director of ARTS Lab at the University from 2009-2010. From 2005-2008 she served as the Director of the Integrated Media Arts Master of Fine Arts Program at Hunter College/CUNY. From 2006-2009 she was co-chair of the Leonardo Education Forum, an affiliate of the MIT Press and the College Art Association of America (CAA) that promotes the advancement of research and academic scholarship at the intersections of art, science, and technology and from 2004-2008 she was co-chair of the New York Society for Acoustic Ecology, a multi-disciplinary group exploring the urban sound environment and a chapter of the American and World Forums for Acoustic Ecology, for which she now on the board as Southwest Society Representative.

Check out more of Andrea’s work on her website here.